Study Says: Laugh Your Way to a Pregnant Belly 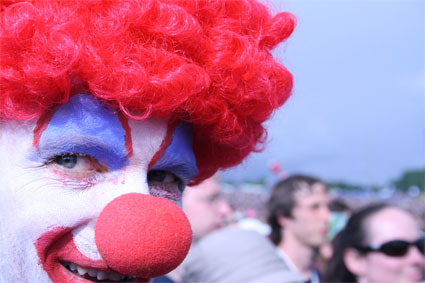 Whether you chortle, chuckle, or cackle, having a good laugh--as we've known for decades--reduces stress. And according to an Israeli study, it can also make you pregnant. OK, that's a slight exaggeration. But researchers who studied 219 women undergoing in vitro fertilization (IVF) discovered that women were more likely to become pregnant if they were paid a visit by a professional "medical clown" after the procedure. The numbers speak for themselves: 36 percent of the clowned women became pregnant, whereas only 20 percent of the un-clowned women conceived. According to the study, led by Shevach Friedler and published in Fertility and Sterility, a medical merrymaker visited the fertility clinic regularly for a year. Half of the women studied were visited by the jester soon after they had received a fertilized embryo. Each time, the funny-bone tickler stayed for 15 minutes and acted through a set routine. As the Guardian reports:

The researchers found that, compared to women who came to the clinic on a "non-clown" day, those who'd had a laugh were more than twice as likely to become pregnant, when other factors such as age, type of infertility and the number of embryos transferred, were taken into account.

Although it's not clear whether the clown visits actually reduced the women's stress, Friedler sees clown-induced conception as possibly "one of the least hazardous interventions in our field." And the best detail of the study--Friedler designed the clown's routine himself, as he's a mime aficionado. There's no word on this in the study, but we hope the doctors checked with the women to be sure none of them had psychic scars from traumatic birthday parties. If a clown like the one pictured above came leering into a hospital room, a clown-phobic lady's stress levels would be through the roof. Related Content: Science Not Fiction: Synthetic Ovaries Bring Eggs Out of the Womb and Into the Petri Dish Science Not Fiction: Fringe: The Ultimate Test Tube Baby 80beats: Making Movies of Developing Embryos Could Mean Better IVF 80beats: Leftover Embryos at Fertility Clinics Pose Troubling Questions for Patients DISCOVER: Laugh Well, Live Well

The SciencesHumoural Theory: Inside the Strange Pseudoscience That Dominated Western Medicine for 2,000 Years
Recommendations From Our Store