A field long touted for its therapeutic potential is finally producing results. 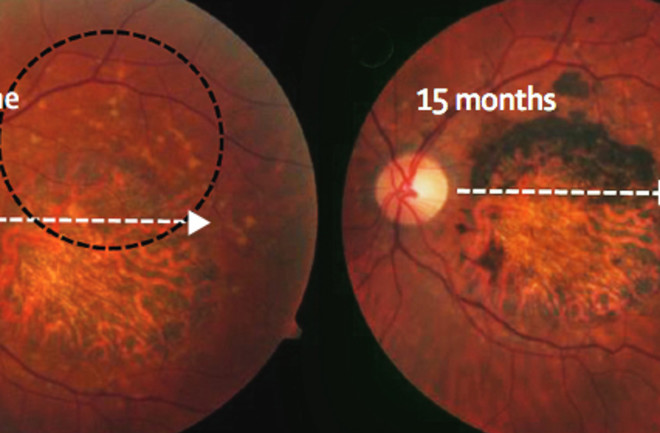 Researchers used stem cells to create retinal pigment epithelium cells, which were transplanted into a patient's retina (left) in an area depicted by the black circle. After 15 months, the new cells had grown. | Steven Schwartz and Robert Lanza

Sign up for our email newsletter for the latest science news
A colony of embryonic stem cells. | Kauczuk/Wikimedia Commons

Since embryonic stem cells were first cultured in the lab more than 30 years ago, researchers have talked up their therapeutic potential. Able to differentiate into dozens of tissue types, stem cells might be used to regenerate organs and treat numerous diseases.

The proof has been slow to come, however. “You’ve been hearing about them for decades, but where’s the beef?” asks Robert Lanza, chief scientist at Advanced Cell Technology and a pioneer of regenerative medicine. The field has been dogged by political and religious opponents, who object to the destruction of human embryos during the harvest of cells.

So there was extra satisfaction in October when two scientific teams, Lanza’s and a group led by Harvard University’s Douglas Melton, each announced advances. The group at Harvard’s Stem Cell Institute coaxed human embryonic stem cells into pancreatic cells. Transplanted into diabetic mice, the cells secreted insulin and cured the mice in 10 days. The next step — Melton says it’s the last hurdle before human trials — will be to shield the foreign cells from rejection by the body’s immune system.

Researchers used stem cells to create retinal pigment epithelium cells, which were transplanted into a patient's retina (left) in an area depicted by the black circle. After 15 months, the new cells had grown. | Steven Schwartz and Robert Lanza

Lanza’s therapeutic target has been the eye — specifically, eyes failing from macular degeneration. The study included 18 patients, half with age-related macular degeneration and half with Stargardt’s macular dystrophy, the leading causes of blindness in adults and juveniles. From the embryonic stem cells, the researchers produced a type of tissue called retinal pigment epithelium (RPE). Growing RPE cells in quantity, they injected them into one eye of each patient. The subjects were followed for an average of two years.

Not only were there no adverse effects from the transplanted cells — this was primarily a safety trial — but 10 patients showed marked improvements in vision, and the eyesight in another seven seems to have stabilized.

Since it’s now possible to reprogram adult cells to make tissues like RPE, Lanza expects the controversy over stem cells to subside. He also plans to use embryonic cell lines “where we extract a cell and don’t damage the embryo. We will be able to satisfy all but a small number of people."