Stats Suggest Recession Prevented Over 70K Babies From Being Born 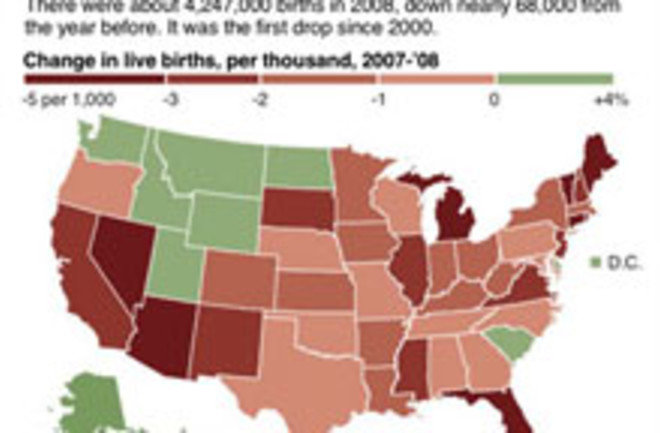 Birth rates have decreased by about 2 percent in 2008, the first year since the beginning of the decade that rates did not increase, according to statistics from the National Center for Health Statistics. Many experts speculate that this drop is due to the recession. Still, birth rate statistics have not yet been finalized, and some believe that a decrease in immigration could account for the decrease in births. As any parent knows, children are expensive, so in a shaky economy, it makes sense that fewer people would be having them.

“It’s the recession,” said [sociologist] Andrew Hacker... “Children are the most expensive item in every family’s budget, especially given all the gear kids expect today. So it’s a good place to cut back when you’re uncertain about the future” [New York Times]. Perhaps not coincidentally, the two states with the largest decrease in births--California and Florida--are also the ones that faced the biggest problems due to the housing crisis.

Additionally, as the economy continued to worsen during early 2009, leading to more uncertainty and layoffs, the birth rate dropped even more quickly. Although it's impossible to definitively tie birth rates to the economy, the decreased in births has accompanied other points of economic uncertainty during U.S. history. Record lows were recorded during two economic crises: the Depression in the 1930s and the Arab oil embargo in the 1970s