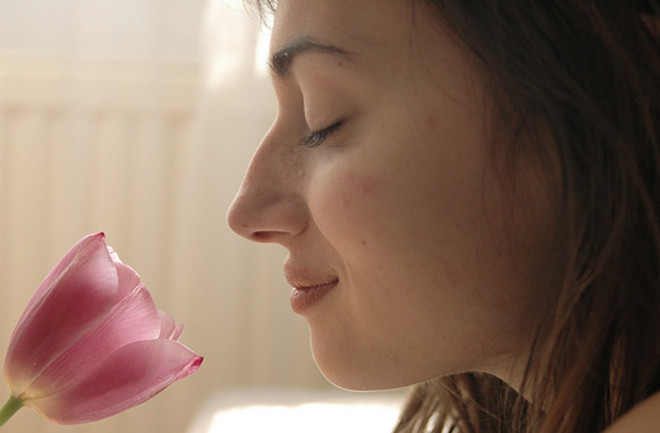 Photo: Flickr/nyuhuhuuHere on Seriously, Science? we like to feature studies that test commonly-held beliefs. If the data confirm the belief, many of you, our dear readers, complain that the study was a waste of money "because we already knew that!". But it's studies like this one that highlight why testing commonly-held beliefs is worthwhile. Here, researchers tested the belief that pregnancy heightens a woman's sense of smell by having groups of pregnant women, non-pregnant women, and men smell compounds of known concentrations. Surprisingly, they found out that pregnant women are no better at detecting very dilute smells, meaning that they do not have a more sensitive sense of smell. This doesn't mean that pregnant women don't actually experience a different response to smells, just that they aren't picking up on odors they couldn't smell before. So there you have it, another old wives' tale bites the dust. Science, FTW!Pregnancy does not affect human olfactory detection thresholds. "Hyperosmia is suspected in pregnancy; however, no empirical study using validated measures of olfactory function has clearly confirmed the anecdotal reports of this phenomenon. The goal of the current study is to compare the olfactory sensitivity of pregnant women to that of nonpregnant women and men. All participants rated their sense of smell and pregnant women listed the odors to which they were most sensitive. Detection thresholds were measured using a well-validated protocol. A group of pregnant and nonpregnant women was studied longitudinally using a signal detection procedure designed to detect small differences in sensitivity. Pregnant women, particularly in the 1st trimester, rated their sense of smell to be higher than non-pregnant women and men and indicated many (primarily unpleasant) odors to which they were more sensitive. Women rated their sense of smell higher than men. However, there was no sex difference in thresholds and neither thresholds nor signal detection measures of sensitivity were significantly affected by either sex or pregnancy status. The implications of the lack of relationship between self-report and measures of olfactory sensitivity, particularly in pregnancy, are discussed." Related content: NCBI ROFL: True brothers from another mother: two different mothers pregnant with full siblings. NCBI ROFL: Get this baby out of me! NCBI ROFL: Finally, a male contraceptive: behold the ball cozy!