Thousands of children suffer from this mysterious disease, and rivers may hold a clue to its origins. 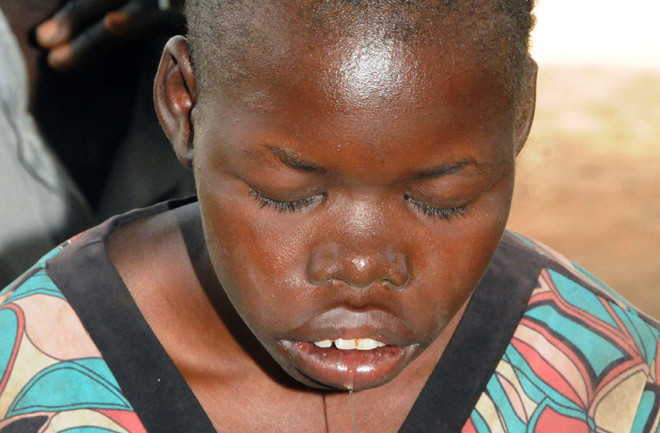 Vicky Apara, 15, is one of thousands of children in Uganda suffering from the mysterious and sometimes fatal nodding disease now spreading there. | AP Photo/Stephen Wandera

In 2009, the Centers for Disease Control and Prevention (CDC) received a plea from officials in Uganda: Could the agency investigate a mysterious head-nodding disease spreading among more than 3,000 young people there? Healthy children would suddenly begin to nod their heads uncontrollably, sometimes falling into a trancelike state. The incidents seemed to be triggered by food, so eating was a struggle for the victims; some were dying of malnutrition as a result.

“We saw families lock their children in their homes or tie them to trees to prevent them from injuring themselves while the family was working,” says the CDC’s Scott Dowell, an infectious disease specialist charged with finding the cause.

Examining the children with brain scans, Dowell determined the spells were seizures like those seen in epilepsy. But what was the cause? Blood and urine tests ruled out hundreds of viruses, as well as hepatitis E, measles, heavy-metal poisoning, tainted bush meat, and vitamin B12 deficiency.

In August, the World Health Organization and the CDC cosponsored a four-day conference in Uganda’s capital, Kampala, to identify new lines of research. One clue is that sufferers of a disease called river blindness are much more likely to have nodding syndrome as well. That cast suspicion on Onchocerca volvulus, a parasitic worm transmitted by black flies that breed in sub-Saharan rivers (among other places). The worm’s larvae can trigger damage in the eyes, leading to river blindness if untreated.

Autopsies could determine directly whether they also cause brain damage in nodding disease sufferers, the CDC says. Infection with O. volvulus may be just one of the triggers, Dowell adds. He suspects that vitamin B6 deficiency, known to cause a severe form of epilepsy, might contribute as well.

Rivers in sub-Saharan Uganda may hold clues to the disease's origins. | istockphoto
1 free article left
Want More? Get unlimited access for as low as $1.99/month
Subscribe

More From Discover
Health
What Is Delta 8 THC? Here’s Everything You Need to Know
Health
Can You Overdose on Marijuana?
Health
Are Fake Meat Products Good for You?
Health
3 Steps To Get Tight & Toned For A Lasting Transformation
Health
Ibogaine: The Psychedelic Drug That Could Fight Addiction
Health
Hugging Is an Evolutionary Tool for Survival
Recommendations From Our Store
My Science ShopCosmos: Possible Worlds
My Science ShopStrange Science
My Science ShopEinstein's Universe
My Science ShopElements Flashcards
Shop Now
Stay Curious
Join
Our List