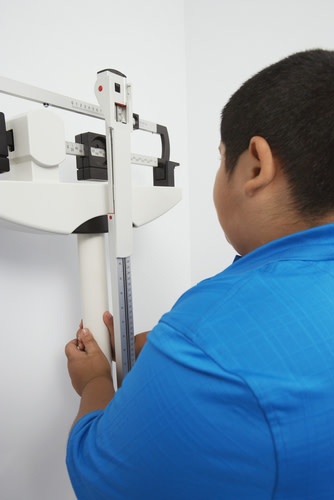 Childhood obesity has been rising fast, but new genetic findings may aid progress toward a treatment. According to a study published today, a single altered gene appears to be responsible for upping some obese children's appetite, slowing their metabolism and causing lasting insulin resistance.  The good news is that by understanding how the gene misbehaves, researchers may be able to use existing treatments or develop new ones to reverse the condition. In this study, researchers sequenced the genomes of more than two thousand patients, adults and children, with severe, early-onset obesity (where the condition kicks in before age 10). They found that mutations on a particular gene called KSR2 triggered problems with both appetite and metabolism.

Children with the KSR2 mutations were driven to eat more, a common effect of obesity-related genes. The real surprise was that the genetic mutation also caused patients' metabolic rates to drop, preventing their cells from burning calories as well as they should. As described in The Independent,

It has long been suggested that some people may be predisposed to obesity because of a “slow metabolism” but this is the first time that scientists have been able to identify a definite genetic basis for such an idea.

The mutations occurred in about two percent of patients with severe, early-onset obesity---twice as often as in the study's control group.

Of Mice and Men

Finding this obesity gene wasn't just a shot in the dark, though. Researchers already knew that deleting the KSR2 gene triggered obesity in mice. The new paper, published today in the journal Cell, shows that the findings also apply to humans. Previous studies on other, obesity-related genes have shown an increased appetite, but the KSR2 gene is unique in that it also points to a cause for insulin resistance and slower metabolism. As one of the researchers told The Independent,

“KSR2 is different in that it also plays a role in regulating how energy is used in the body. In the future, modulation of KSR2 may represent a useful therapeutic strategy for obesity and type-2 diabetes.”

In the study, researchers were able to successfully correct one part of the condition---metabolizing fatty acids---using a diabetes drug called metformin. That offers hope for other treatments to address the condition in the future. Image credit: bikeriderlondon/Shutterstock