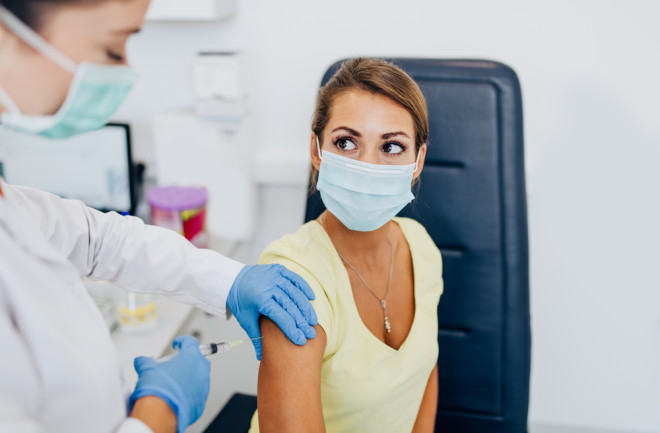 As scientists race to produce a safe and effective vaccine for COVID-19, many experts are pondering how to administer such a vaccine — and whether it should be mandatory.

The United States is no stranger to mandatory vaccination programs and there’s plenty of evidence that they can work, but Daniel Salmon, director of the Institute of Vaccine Safety at Johns Hopkins Bloomberg School of Public Health, fears attitudes towards public health measures have changed so rapidly in 2020 that such an approach for COVID-19 could backfire. “I’m really worried about that,” he says. “Lots of people don’t want to wear masks or accept that the virus is real.”

Acceptance of a vaccine, mandatory or not, is similarly challenged. The share of Americans who say they’d either probably or definitely get vaccinated against COVID-19 has tumbled from 71 percent in May to 51 percent in September, according to polling data from the Pew Research Center. This downward trend is more pronounced among Republican Party voters — a majority of whom say they would now shun such a vaccine — but the data showed a similar trend among Democratic Party voters, too.

“Look at the backlash right now, you can only imagine what it would be like with [mandatory] vaccines,” says Sean O’Leary, an infectious disease specialist at the University of Colorado.

And yet, mandatory vaccination programs have existed in the U.S. since the early 20th century, when all children were required to attend elementary school for the first time. States began to legislate that access to public education be conditional upon vaccination for various diseases. These rules expanded in the 1970s and 1980s and studies have shown that the laws are clearly linked with lower rates of vaccine-preventable diseases.

How strict mandatory rules need to be is slightly less clear. In 2016, California became the first state in almost 30 years to forbid non-medical exemptions to its mandatory vaccination programs. One study demonstrated that while the percentage of vaccinated students entering elementary school did rise, evidence also indicated that some parents tried to circumvent the system.

“Medical exemptions rose, and they were mostly bogus,” O’Leary says. “There were also more parents in California who decided to home school.” California has since introduced further legislation to provide more oversight for medical exemptions, but it’s too early to judge the consequence.

The majority of evidence on the effectiveness of mandatory vaccinations comes from kids. A COVID-19 vaccination, however, would need to focus on adults. And to be effective, any such program would require different motivators to ensure compliance.

“Mandatory vaccination isn’t forced vaccination,” says Katie Attwell, a political scientist at the University of Western Australia who specializes in mandatory vaccination policy. Rather, Attwell notes, it’s more about putting a series of economic and social nudges in place so adherence is the default option.

One of the most obvious motivators would involve companies tying employment to vaccination: no shot, no job. As Draconian as that may sound, many U.S. hospitals already have mandatory flu vaccination policies in place for their employees, starting with the Virginia Mason Medical Center in Seattle, which implemented the first such policy in 2005. A study has since found that it has consistently achieved vaccination rates of 98 percent. That figure is in stark contrast to hospitals in other countries where flu vaccines are only encouraged, not mandated — the European average for flu vaccinations among healthcare workers is less than 40 percent, according to another study.

If tying vaccinations to employment is one way to target adults, then withdrawing public assistance from non-compliant people is another. This has been trialed in Australia with the controversial “no jab, no pay” scheme, where parents see child benefit payments reduced if they don’t have their kids vaccinated. Hundreds of thousands of more children are reported to have been vaccinated as a result, but some studies suggest that anti-vaxxer parents are prepared to take the financial hit.

If such a program were contemplated for the U.S., Salmon says there would serious ethical concerns. “If you want to withhold welfare, that might work,” he says. “But it will disproportionately affect the poor and that’s not very equitable.” Offering tax credits to individuals who get vaccinated is a less punitive scheme, but Salmon questions how effective it would be. “Tax credits will provide an incentive, but I think it’s unlikely to convince someone who really doesn’t want to do it,” Salmon says.

Should It Be Done?

While the evidence shows that mandatory vaccination policies can improve immunization rates under the right conditions, experts we spoke with view it as a last resort. “If you don’t need to make it mandatory, don’t,” says Salmon. Instead, it’s better to wait and see how many Americans will voluntarily offer their arms for a COVID-19 shot when the time comes and take it from there.

“I’m not going to pretend I can predict the future,” says O’Leary. “But I suspect fear of the disease and desire to get past the pandemic will push uptake of a COVID-19 vaccine.”

More From Discover
The Sciences
Study Probes How to Change Societal Behavior for the Better
Planet Earth
What You Need to Know About Lyme Disease
Environment
Climate Change is Likely to Increase the Risk of Infectious Diseases
Health
Danger in Paradise: What One Man's Unusual Affliction Can Teach Us About Rat Lungworm Disease
Health
Deer Likely Transmitted Coronavirus to a Human
Health
Citizen Scientists Help Researchers Track Disease
Recommendations From Our Store
My Science ShopDiscover STEM Kits
My Science ShopDiscover 2022 Calendar
My Science ShopStrange Science
My Science ShopElements Flashcards
Shop Now
Stay Curious
Join
Our List