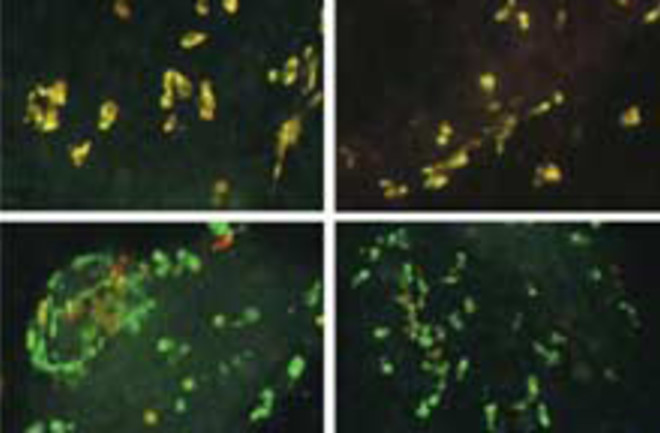 Using a bit of biotech wizardry that is becoming increasingly mundane, researchers took skin cells from patients with type 1 diabetes, and turned them first into induced pluripotent stem cells (iPS cells), the rough equivalent to the embryonic stem cells that can develop into any kind of tissue. Then researchers directed the cells to develop into insulin-producing beta cells, the type of cells that are destroyed by the immune system in type 1 diabetes. Stem cell expert Meri Firpo notes that this technology could one day be used to create pancreatic beta cells

for transplant from a person's own skin cells. That way, there would be no need for immunosuppressive medications. However, because the current technique uses genetic manipulation to change the cell, Firpo said long-term safety issues would have to be addressed. Mouse cells that have been similarly manipulated have developed benign tumors, she said. So, using such cells for transplant is definitely not "a near-term thing," she stressed [HealthDay News].

According to the study, published in the Proceedings of the National Academy of Sciences, the immediate applications of the work will be in diabetes research, as beta cells with the genetic material of diabetes patients can be studied in the lab.

"What you get is the ability to watch, for the first time, type 1 diabetes develop," says senior author Douglas Melton.... "Until you watch a disease develop, you will not understand the mechanism, and you therefore cannot devise any kind of sensible treatment or cure." ... Ultimately, Melton plans to construct a "living test tube" for probing the interplay between the beta cells and the immune system in diabetes [Technology Review].