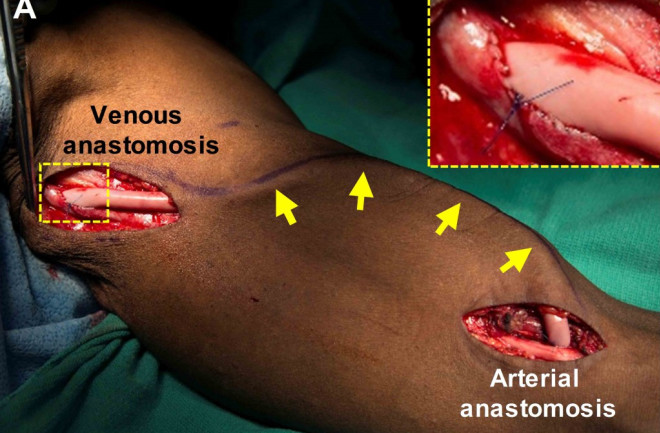 The scientists transplanted their lab-made blood vessels (yellow) into this patient with end-stage renal failure. (Credit: R.D. Kirkton et al. Science Translational Medicine (2019) Heart disease is the leading cause of death around the world. Many cardiovascular disorders damage blood vessels, the network of ducts the heart pumps blood through to send oxygen and nutrients to the rest of the body. But fixing damaged blood vessels often requires replacing them with blood vessels from other parts of the body or synthetic substitutes. Neither solution is great. Now researchers report Wednesday in the journal Science Translational Medicine that they have engineered artificial blood vessels that transformed into living tissue in patients who took part in their experiment. The new technology promises to make blood vesselrepair safer and more effective, the researchers say. “The idea was that if blood vessels could be made in the lab, they could be used to treat patients with different vascular needs and possibly have less morbidity than current alternatives,” said Heather Prichard, chief operations officer at Humacyte, the North Carolina biotech company that led the research.

At the moment, doctors often take blood vessels from one part of a patient's body and graft them into another body part. But the options for harvesting and repurposing these vessels is limited. And the current synthetic grafts increase the risks of infection and other complications. Donated blood vessel grafts can also be rejected by a patient's body. To overcome these obstacles, researchers at Humacyte wanted to use human vascular cells as a base to grow new blood vessels in the lab. Harvesting from donated cadavers, the scientists collected samples of the muscle cells that make up blood vessels and the endothelial cells that form a lining on the inside of the vessels. Then, they seeded those cells onto a biodegradable mesh scaffold. Once they'd grown, the scientists removed the cadaver's vascular cells, leaving a blood vessel made of proteins like collagen that surround and support the tissue’s structure. “The removal of the cells is important so that the vessels can be manufactured in large batches and stored on the shelf in operating rooms for implantation into any patient,” Prichard explained. The new vessels, dubbed human acellular vessels (HAVs), are about 15 inches long with a quarter inch diameter. The structure and strength of the HAVs mimic human arteries and veins.

The HAVs are in clinical trials for hemodialysis access in end-stage kidney failure patients. In the new study, researchers examined small pieces of the HAVs that were removed from 13 patients during routine operations. The scientists discovered that although the vessels do not contain any cells when they are implanted in patients, the patients’ own cells set up shop on the scaffold. The process “turns the HAV into a multi-layered living tissue similar to native blood vessels,” Prichard said. Although the researchers suspected this might be the case, this is the first time it’s been shown to be true in humans. The researchers went on to show that patient’s own cells even repaired implanted HAVs that had been damaged from dialysis needles. The finding suggests the engineered vessels might also be capable of self-healing. The team’s discovery means, “Over time the resultant HAV becomes like the patients’ own self-sustaining blood vessel,” the authors write.