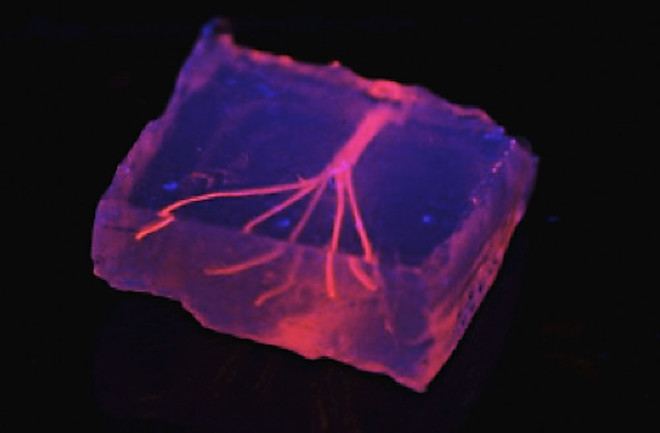 By embedding wormlike, 3-D-printed casts in a gel, then removing them, Harvard’s Ali Khademhosseini and his team built rudimentary blood vessels. | Khademhosseini Lab

Each year, thousands of people die waiting for tissue and organ donations, which are scarce. For that reason, tissue engineers are working to build replacements, and they’ve managed to do it for sheetlike tissues, like the skin and bladder. But replacement tissues for solid organs, such as the liver, heart or kidney, are tougher to construct because cells inside those tissues rely on a network of blood vessels that are difficult to replicate.

In February, Jennifer Lewis’ team reported printing tissue pieces infused with the beginnings of blood vessels. They used a custom-built 3-D printer and special inks containing extracellular matrix — the naturally derived material that the body uses to knit cells into tissues. The printer builds tissue, layer by layer. As the print heads move, they squeeze out inks like toothpaste from a tube. Those inks solidify into worm-shaped gels, some of which contain living cells. To print blood vessels, the researchers made the worm-shaped gels from a special ink that, strangely, melts as it cools. This allowed them to suction out the resulting liquid, leaving tunnels that they lined with other cells to form rudimentary blood vessels.

In May, a second team, led by Ali Khademhosseini, reported building tiny blood vessels that branch or merge in three dimensions, as blood vessels do in human organs. First, they 3-D-printed wormlike strands of a gel called agarose, each serving as a cast of a tiny blood vessel. Around those casts, they poured a cell-rich liquid that solidifies into a biocompatible gel. Then they carefully tugged or suctioned away the agarose casts, leaving channels that they lined with cells to create simple blood vessels.