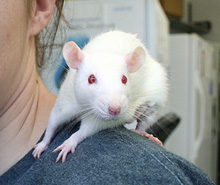 For the first time, scientists have derived and cultured embryonic stem (ES) cells from rats, paving the way for genetically engineered rats that would more accurately model some human diseases than the currently available genetically engineered mice. Two collaborating teams developed a new approach to derive the ES cells, using a new cocktail of molecules to protect their precious pluripotency, the ability to differentiate into any type of cell.

"This is a major development in stem cell research because we know that rats are much more closely related to humans than mice in many aspects of biology. The research direction of many labs around the world will change because of the availability of rat ES cells," says Qilong Ying [Xinhua]

, who led one of the teams. ES cells from mice have been available since 1981, and different researchers have created hundreds of different strains of "knock-out" mice—ones raised from ES cells in which certain genes are silenced to make apparent the genes' functions. With mice, ES cells were grown with a mixture of growth signals to make them divide without differentiating. But transferring the same technique to rats and other mammals proved surprisingly difficult. To the great frustration of researchers, stem cells isolated from rat embryos and cultured with growth signals would quickly lose their pluripotency. The new strategy, reported in twostudies in Cell [subscription required], involves growing the ES cells in a mixture of three key molecules that block the signals that normally induce differentiation.

“Our discovery was that if you want to maintain cells in the undifferentiated state, you must block signals, not activate them,” says Ying... By repressing differentiation, the researchers could hold the cells in what they call a “ground state,” a blank slate ready to turn into any tissue in the body [Science News].

So far, the researchers have been able to coax the newly isolated rat stem cells into forming muscle cells, gut cells and brain cells. After a particular treatment, researchers even saw what they call “spontaneously beating areas” in dishes, signaling newly formed heart cells [Science News]. The researchers were also able to mark ES cells with fluorescent genes, implant them into a developing rat embryo, and watch as they developed into different types of cells. The goal is to eventually create "knock-out" rats by introducing

specific genetic mutations into the DNA of rat stem cells. These stem cells could then grow into a fully formed rat, which could be put through its paces to find the effect of the mutation [Science News].

Ying believes the first "knock-out" rat could be born within the next six months. Human diseases including high blood pressure, diabetes, and Parkinson’s could be better modeled using these "knock-out" rats. The new technique could also lead to ES cells being derived from larger species, such as cows and pigs, that are even closer in size to humans. Martin Evans and Mario Capecchi, who won the 2007 Nobel Prize in Medicine for developing "knock-out" mice,

agree that moving from rat embryonic stem cells to genetically engineered rats should be swift and straightforward. However, they think mice have now become so well studied and well established that knockout rats may be less appealing. "Does this mean that everyone will switch to rats? I doubt it," says Capecchi, explaining that the cost of keeping laboratory rats is about ten times as great as for mice [Nature News].