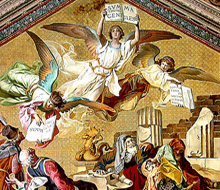 The Vatican has issued new ethical guidelines in response to the biomedical advances of the last 20 years, and has come down hard on assisted reproduction technologies and genetic engineering. The document, Dignitas Personae (which translates as "human dignity"), reaffirm the church's opposition to in vitro fertilization. It also tells Catholics that the church also doesn't condone "adopting" leftover fertilized embryos from fertility clinics, and frowns upon the genetic testing of embryos before implantation, which could lead to the embryo being discarded.

The Vatican says these techniques violate the principles that every human life — even an embryo — is sacred, and that babies should be conceived only through intercourse by a married couple [The New York Times].

These instructions stem from two fundamental theological principles: that life begins at conception and that the origin of human life is the "fruit of marriage." ... The document now makes clear that the morning-after pill, RU-486, and intrauterine devices (IUDs), which either intercept the embryo before implantation or eliminate it after implantation, "fall within the sin of abortion" [Scientific American].

The guidelines may come as a surprise to many Catholics who don't realize that the church takes such a strict stance on medical technologies like in vitro fertilization that are often seen as routine and beneficial.

The document also for the first time raises questions about whether it is moral for people to "adopt" embryos left over from IVF -- a practice President Bush highlighted when he restricted federal funding of stem cell research. While the practice may be "praiseworthy" in some ways, the Vatican document warns that it could help perpetuate the creation of more embryos [Washington Post].

A recent study found that there are currently more than 400,000 leftover fertilized embryos chilling in the freezers of fertility clinics around the country, which pose an ethical dilemma for the patients who created them. The document also objects to embryonic stem cell research, human cloning, and certain types of genetic engineering. But it states that the church has no problem with research on adult stem cells that are removed from an adult donor without causing any harm.

Dignitas Personae also strikes a compromise with gene therapy, which is approved for treating diseases, though not for non-therapeutic uses, such as making people smarter or stronger. Even permanent genetic modifications that can be passed to children are acceptable, as long as it's safe [Wired News].

NIH Director on Human Gene Editing: 'We Must Never Allow our Technology to Eclipse our Humanity'