Marijuana's interaction with other drugs is still poorly understood. 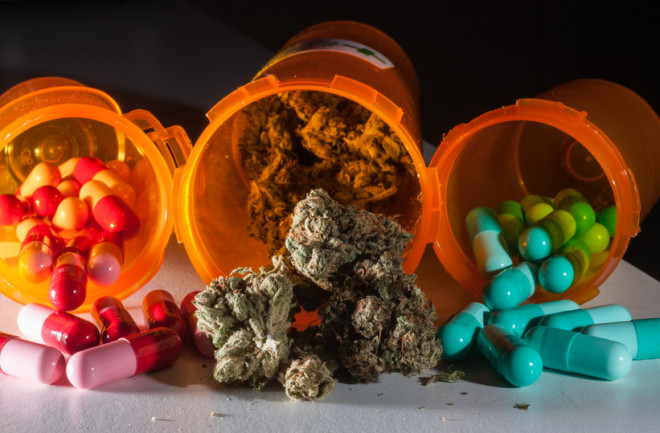 Increasing numbers of Americans are using marijuana. In some states, obtaining marijuana is as easy as walking into a store and picking out what catches the eye in a glass display case.

But even as states move to legalize recreational and medical cannabis, it remains a taboo topic, even in doctors’ offices. Now, a new study suggests that keeping marijuana use secret from medical professionals probably isn’t a good idea.

A team of researchers in Colorado has found that people who regularly use marijuana require more of a few commonly-used sedatives and anesthesia before routine medical procedures. The study, published in The Journal of the American Osteopathic Association, analyzed the medical records of 250 people who underwent endoscopies, which are procedures that involve a doctor inserting a camera inside of a person’s body to see what’s happening inside.

Of the 25 people who reported smoking marijuana or using edible cannabis products on a daily or weekly basis, the researchers say they needed higher doses of drugs and anesthesia to achieve optimal sedation. On average, cannabis users needed 14 percent more fentanyl, 20 percent more midazolam, and 220 percent more propofol before colonoscopies and other routine medical procedures.

The researchers say this finding is significant because higher doses often means a higher likelihood of negative — and potentially dangerous — side effects.

"Some of the sedative medications have dose-dependent side effects, meaning the higher the dose, the greater likelihood for problems. That becomes particularly dangerous when suppressed respiratory function is a known side effect," said lead researcher Mark Twardowski, an osteopathic internal medicine physician in Grand Junction, Colo., in a statement.

In colonoscopies, which made up the majority of cases the researchers reviewed, midazolam and propofol are the most commonly used sedatives, and fentanyl is a frequently used as a painkiller. Because the researchers only studied marijuana's impact on these three drugs, it's unknown if marijuana would interact with other sedatives on the market.

It's not totally clear how marijuana interacts with the three drugs studied. The researchers think it might have something to do with how the main psychoactive chemical compound in marijuana, called tetrahydrocannabiol (THC), interacts with the body’s endocannabinoid and opioid systems.

These are two interrelated neurotransmitter systems that are involved in drug processing, pain, and more. THC may bind to these receptors and alter how other drugs are metabolized. People who frequently use cannabis may need higher doses of certain sedatives to be effective, as this study found.

Although THC is believed to be the main culprit in sedative interactions, a compound called CBD, or cannabidiol, isn't off the hook. Consumer products containing CBD, which is a non-psychoactive compound found in marijuana and hemp, have soared in popularity in recent years. But like THC, Twardowski said researchers are in the dark when it comes to CBD and sedative interactions.

"A CBD effect has not been ruled out," Twardowski said in an email. "We are considering adding some CBD evaluation to phase two of our study."

More research is needed overall to understand how marijuana, which has at least 85 cannabinoids and 27 terpenes, impacts processes in the human body and how its chemical compounds interacts with other drugs.

Marijuana is still illegal at the federal level in the United States, which also has policies and regulations in place that limit research.

"Because of the illegal status of cannabis for so long, and continued federally illegal status, the needed basic science is lacking. If it is a receptor issue, it is certainly interesting that three different classes of medications were affected," Twardowski said.

While research has lagged, consumption of the drug is booming. The study noted that between 2007 and 2015, marijuana use in the United States increased 43 percent. An estimated 13.5 percent of adults used marijuana over this period, with the greatest increases among people 26 and older.

But even as marijuana becomes more mainstream, people who use cannabis may want to be mindful that it's still new to the medical community.

"Patients absolutely need to be honest about their cannabis use with their providers. At this point, we don’t have specific recommendations on doses of medications or even the types of medications to be used, but having the information will allow the provider to be better prepared for the patient’s care needs," Twardowski said.

This story was updated on April 17, 2019 to include comments from the researcher.