Ramen and the Perfect Egg

The arrival of autumn comes with the promise of changing leaves and chillier climates, often cueing our urge to prepare warmer meals aimed at combatting the frigid weather. One foolproof method that guarantees victory against the cold is a hot bowl of soup, such as ramen. There are many variations of ramen but one dear to many hearts (and mouths) is tonkotsu ramen. This style of ramen involves the boiling of pork bones for extended periods of time to produce a deliciously fatty and hearty pork broth that has an incredible depth of flavor. The broth alone is what makes the ramen but the accoutrements that dress the soup are just as important. Tonkotsu ramen is often served with slices of marinated, slow-cooked pork loin (chashu), enoki and wood ear mushroom, dried seaweed (nori), and green onions. However, one of my favorite ramen toppings is the soy-marinated soft-boiled egg known as ajitsuke tamago.

Photo credit: Anne Regalado (My Bare Cupboard) Perfectly prepared ajitsuke tamago has a set outer layer of egg white with a delicate, intact silky egg yolk. However, achieving the ideal soft-boiled egg isn’t a trivial task. The preparation of both hard and soft-boiled eggs culminates in the process known as protein denaturation. Eggs themselves are nothing more than protein reservoirs and their exposure to heat disrupts the chemical and ionic bonds involved in maintaining their secondary and tertiary configurations causing them to unfold into linearized structures [1]. The unfolding of complex proteins into strings of amino acid chains through thermal energy transfer allows for the formation of new bonds between molecules that facilitate the transition of a raw, liquid egg into a cooked, solid egg [1]. Ovotransferrin and ovalbumin and are the most abundant proteins found in egg whites and their denaturation causes them to form tightly associated protein clumps that result in the solidification of the egg whites at 140°F and 180°F, respectively. [2,3]. Furthermore, the egg yolks will also become solid once they reach a sustained temperature of 160°F. Therefore, one must consider the balance of temperature and time to attain the characteristics of a perfectly soft-boiled egg. 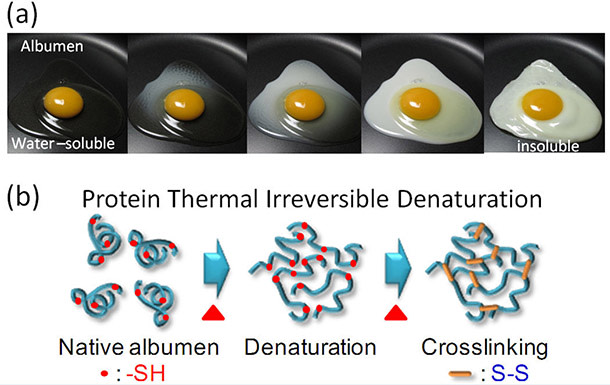 Heat causes the phase transition of the egg from a liquid state to a water-insoluble state that's ready for eating! Photo Credit: SPIE Timothy Ferriss, author of The 4-Hour Chef [4], conducted an experiment to dispel our egg boiling anxieties. He placed four eggs in a pot of water and brought it to boiling temperature (212°F); after 6 minutes he removed each of them in 2-minute increments. His verdict? The sweet spot to achieve the perfect ajitsuke tamago egg consistency is somewhere between 6-7 minutes (see image below). I’d err between 5-6 minutes, as the salt from the soy-marinated will continue to “cook” the outer egg white layer. 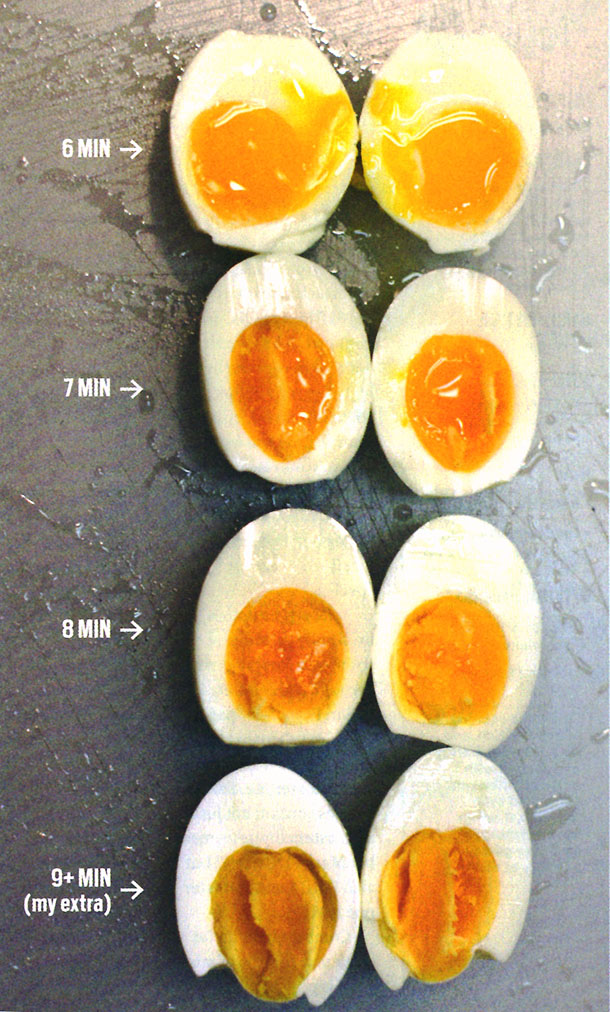 Photo Credit: The 4-Hour Chef If you enjoy the challenge of making dishes at home, check out this tutorial on how to make your own tonkotsu ramen! Tonkotsu Ramen BrothIngredients

Anthony Martin received his Ph.D. in Genetic, Cellular and Molecular Biology at USC and is self-publishing a cookbook of his favorite Filipino dishes. Read more by Anthony Martin