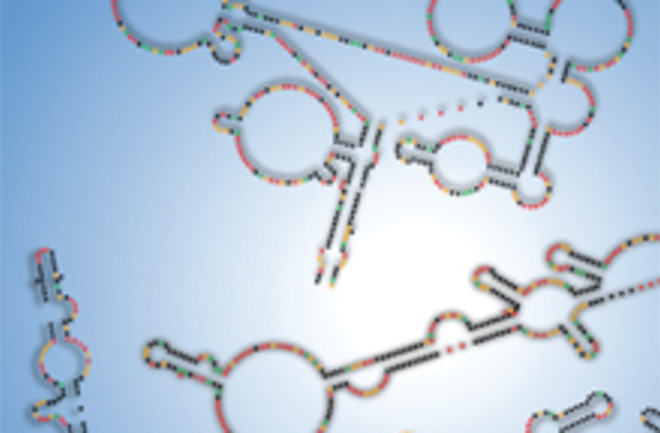 The genome of an HIV virus is a truly twisted thing, but now for the first time researchers have traced its every fold and contour. By mapping its entire structure, they hope to gain

a greater understanding of how the virus operates, and potentially accelerate the development of drug treatments [BBC News].

Usually geneticists focus on the sequence of genes that comprise an organism's genome, but recent evidence suggests that the structure can also play a role in how it functions. Like many other viruses, the HIV genome consists of single-strand RNA, rather than the double-stranded DNA found in most animals. Though

scientists have identified HIV’s genes and their order, just one-fifth of its genome has been described in precise spatial detail. That’s important because genomes don’t look anything like the neatly linear, bar code-like pictures returned by basic sequencing techniques. In reality, genomes are arranged in intricate, three-dimensional loops and whorls. And just as a list of machines isn’t very useful without a description of their arrangement on a factory floor, structure matters [Wired.com].

make better drugs to treat such viruses.... New drugs are often engineered to fit into specific structures on a virus, blocking it from attaching to a cell, for instance, or gumming up its works so it cannot replicate [Reuters].

The study, published in Nature, was carried out using

chemical compounds that linked to pieces of HIV’s genome to trace its shape and arrangement. Their morphological reverse-engineering was necessary because HIV stymies standard atomic-level microscopes [Wired.com].