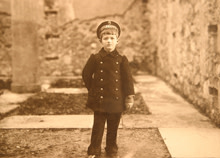 A new genetic analysis has confirmed that the "royal disease" suffered by the male descendants of Queen Victoria was in fact a rare type of hemophilia, the genetic disease marked by a deficiency in blood clotting. Queen Victoria had several sons that died from blood loss after seemingly minor injuries. The disease spread as her descendants married into other royal families across Europe, altering Western history.

Based on the sons' reported symptoms, modern researchers had already hypothesized that the royals had hemophilia, but there was never any concrete evidence. Now, new DNA analysis on the bones of the last Russian royal family, the Romanovs, indicates the Royal disease was indeed hemophilia, a rare subtype known as hemophilia B [ScienceNOW Daily News].

To pinpoint the exact form of the disorder, the scientists extracted DNA from the skeletal remains of Queen Victoria's great grandson Crown Prince Alexei of Russia's Romanov family and decoded the genetic information. (The bones were found in 2007, and it was only earlier this year that they were confirmed to have belonged to the murdered prince, who was killed during the Russian revolution.) The new analysis discovered a mutation in a gene on the X chromosome that codes for the production of Factor IX, a substance that causes blood to clot

The genotyping study was published in the journal Science.

[BBC News]. Since the mutation is on the X chromosome, the disease is carried by females but usually shows up only in male descendants, because they don't have a second X chromosome with a working copy of the gene. Researchers say the finding of hemophilia B in the Romanov's closes the case on the cause of "royal disease."