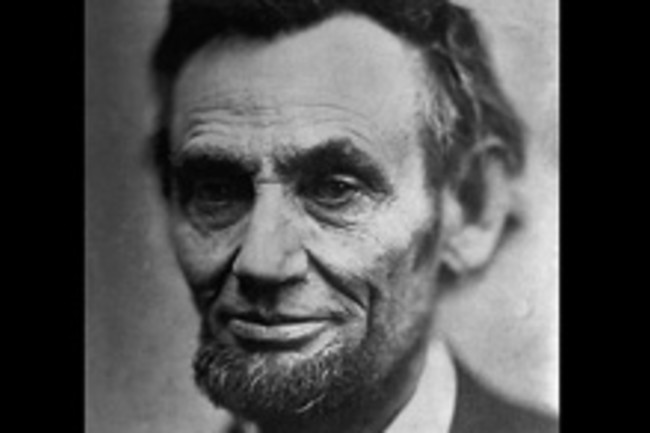 John Sotos has a theory about why Abraham Lincoln was so tall, why he appeared to have lumps on his lips and even why he had gastrointestinal problems. The 16th president, he contends, had a rare genetic disorder — one that would likely have left him dead of cancer within a year had he not been assassinated [Time].

But for Sotos to prove his case, he needs a snip from a historical relic: a piece of the bloodstained pillowcase on which the dying Lincoln rested his head after he was shot at Ford's Theater on April 14, 1865. The piece of cloth is displayed under glass at the Grand Army of the Republic Civil War Museum and Library in Philadelphia. Sotos has asked the museum's board for a sample of the pillowcase, which is stained with both blood and brain matter. But the board is fiercely debating whether to concede to his request.

"This is the Shroud of Turin of Civil War history," said Andy Waskie, a board member.... "We are guardians in trusteeship of this extraordinarily important artifact. On the basis of pure science, the testing is of interest. We have not eliminated it as an option . . . but we want more information" [The Philadelphia Inquirer].

If Lincoln was seriously ill and knew it, Sotos said, that might explain stories of his premonitions about death. "I don't think it was mysticism, I think that was him knowing what his body was telling him," Sotos said. "Then if you're a historian, I think you have to say ... how does that affect how you run the war, your clemency toward soldiers who may have deserted their post, the way you reconcile with the South?" [Time]

Other historians have suggested that Lincoln suffered from other ailments: the genetic disorder Marfan syndrome has been offered as an explanation for his height, and others have proposed that spinocerebellar ataxia caused his awkward gait. But none of these hypotheses have been tested, because no genetic material has yet been released for testing.

The last known wishes of the Lincoln family - to leave the president alone - came in 1876 after a group of Chicago counterfeiters tried to steal his remains from his memorial in Springfield, Ill., and seek a ransom for $200,000 along with the release of an imprisoned cohort. They were unsuccessful; Lincoln's coffin was later encased in steel and concrete to prevent further theft attempts. That left artifacts from the assassination as the only source of DNA [The Philadelphia Inquirer].

Related Content: DISCOVER: Honest Abe's Days of Rage investigates a medication Lincoln took Discoblog: No-Sh*t Study of the Day: Lincoln May Have Had a Facial Defect 80beats: DNA Evidence Proves that Romanov Prince and Princess Rest in Peace 80beats: The DNA of Medieval Manuscripts May Reveal Their HistoryImage: Library of Congress

The Cure for Eczema is Likely More than Skin Deep

Do Your DNA Duty: Collect Wild Animal Poop and Dog Saliva for Science

Can We Bring Back Mammoths From Extinction? Probably Not — Here’s Why