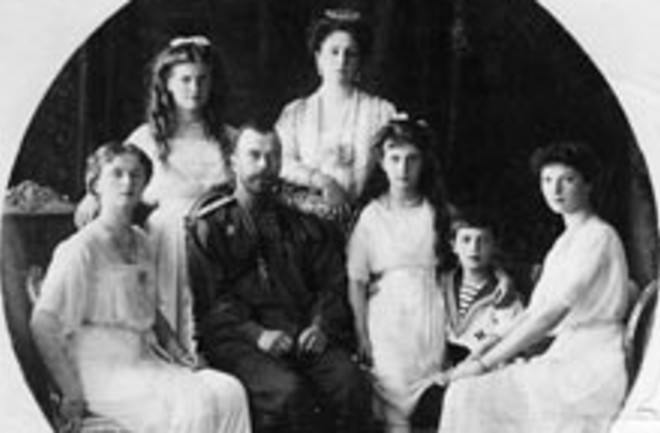 DNA evidence has conclusively put to rest one of the legends spawned by the Russian revolution, proving once and for all that the entire Romanov family--Tsar Nicholas II, Tsarina Alexandra, and all of their five children--were killed by members of the Red Guard in 1918. A genetic analysis of bone fragments from a grave discovered in 2007 has revealed the remains to be those of Romanov crown prince Alexei and one of his four sisters, thus ending the romantic speculation that two children survived the execution and fled the country to start a new life.

The gunshot-and-bayonet murders took place in July 1918 in a cellar in the city of Ekaterinburg, central Russia. Since then, about 200 people have claimed to descend from one or other of the Romanovs who had somehow survived the slaughter in the basement of Ipatiev House [Telegraph].

In 1991, after the fall of the Soviet Union, amateur archaeologist Gely Ryabov revealed the location of a mass grave he had discovered in the 1970s and kept secret. That grave contained the remains of nine bodies. A genetic analysis revealed that the grave contained the bones of the royal couple and three of their children (as well as the family doctor and three servants), but the fact that two children were still unaccounted for generated more mystique.

"Rather than bring closure to the mystery of the fate of the Romanovs, identification of only five of the seven family members continued to fuel speculation that somehow two miraculously escaped the bullets of the executioners and made their way out of Russia" [The Independent]

, says geneticist Michael Coble, lead author of the new study published in the journal PLoS ONE.

Now, newly analyzed DNA evidence from a second, nearby grave discovered in 2007 proves that the bones are those of two Romanov children.... "There is absolutely no doubt that these are the remains of the Romanov family," said Peter Sarandinaki, founder of the Scientific Expedition to Account for the Romanov Children, which has been seeking the remains of the family. "The scientific results are, without a doubt, conclusive," said Sarandinaki, the great-grandson of the White Army general who attempted to rescue the Romanovs before their deaths [Los Angeles Times].

Sarandinaki and Coble plan to present their results to the Russian Orthodox Church in May, in hopes of getting an official burial for what's left of the royal family. Says Sarandinaki:

"Once the church accepts the remains, my duty will be done" [Los Angeles Times].