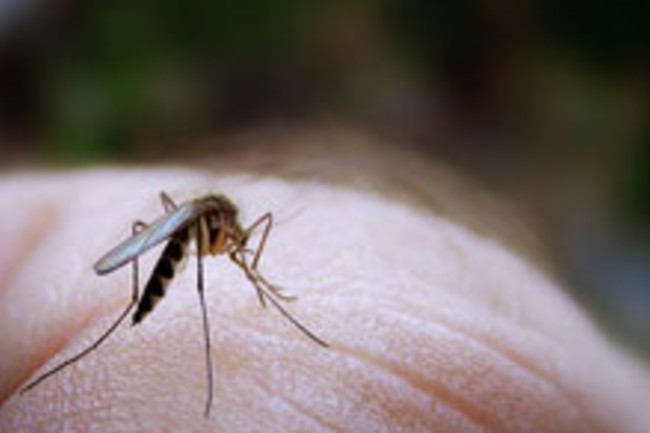 In case you haven't heard, malaria is kind of a big deal. It's the third-deadliest infectious disease in the world, kills about a million people a year, and has a frustratingly ingenious way of becoming resistant to anti-malarial treatments. Now scientists are trying out a rather counter-intuitive method of preventing malaria cases: Using malaria-infected mosquitoes to boost immunity. It's a crazy idea that just might work. That's because people can become immune to malaria if they contract it multiple times, and because the drug chloroquine kills malaria parasites when they're in the bloodstream. The AP reports:

Scientists tried to take advantage of these two factors, by using chloroquine to protect people while gradually exposing them to malaria parasites and letting immunity develop. They assigned 10 volunteers to a "vaccine" group and five others to a comparison group. All were given chloroquine for three months, and exposed once a month to about a dozen mosquitoes — malaria-infected ones in the vaccine group and non-infected mosquitoes in the comparison group. That was to allow the "vaccine" effect to develop.

The next task, of course, was to see if the vaccine actually worked. When the study's subjects stopped taking chloroquine and were bitten by mosquitoes carrying the malaria parasite, subjects in the control group developed malaria, while none in the vaccine group did. Malaria's increasing resistance to the strongest drugs may make a vaccine our only hope for fighting the parasite. So if a few itchy mosquito bites could put an end to this pervasive disease, we'll gladly leave our bug spray at home. Related Content: DISCOVER: Vaccine Production is Horribly Outdated. Here Are Three Ways to Fix It 80beats: Drug-Resistant Malaria in Cambodia Raises Fears of a Super Parasite Discoblog: If You’re Looking for New Drugs, Follow the Bright Bugs