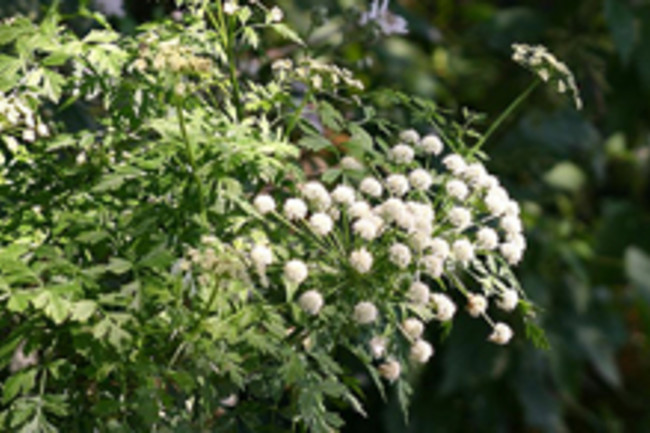 The Greek poet Homer was first to make written reference to a "sardonic smile," and in the millennia since the phrase has been used to denote a bitter or cynical grin. Now, researchers in Italy say they've discovered a poisonous herb that gave rise to Homer's coinage: a plant called hemlock water-dropwort that grows wild across the island of Sardinia and was used in the ancient Sardinians' death rituals.

The plant was used in pre-Roman times for the ritual killing of old people who had become a burden to society. "According to ancient historians, elderly people unable to support themselves were intoxicated with the herb and then killed by being dropped from a high rock or by being beaten to death," the research team wrote [Telegraph]

. The plant's toxins can cause facial muscles to contract, researchers note, leaving an eerie smile frozen on the face of the corpse.

The poet Homer first used the word 'sardonic' as an adverb when describing Odysseus' smile. The Greek hero "smiled sardonically" as he dodged an ox jaw thrown by one of his wife's former suitors. According to some scholars, Homer coined the word after learning that the Punic people who settled Sardinia gave condemned people the smile-inducing potion [Discovery News].

The plant is distantly related to parsnips and carrots and its root has a pleasant taste, yet the entire plant is highly poisonous, capable of producing intoxication and then death.

About a decade ago, a Sardinian shepherd committed suicide by eating a hemlock water-dropwort, leaving a corpse with a striking grin. The death spurred study co-author Mauro Ballero, a botanist at the University of Cagliari in Sardinia, to study every dropwort-related fatality on the island in recent decades. For the new study, Ballero and colleagues detailed the molecular structure of the plant's toxin and determined how it affects the human body [National Geographic News].

The study, published in the Journal of Natural Products, hasn't convinced everyone that the dropwart's toxic effects gave rise to Homer's original sardonic smile; ancient Greek scholar Donald Lateiner will say only that the

"newly proposed concept is plausible but not provable" [Discovery News].

But turning their gaze from the distant past to the future, the researchers say the plant's chemicals may have medical applications.

Its properties could be adapted so that instead of causing muscles to contract, they would cause them to relax – helping people with facial paralysis. "The good news is that the molecule in this plant may be retooled by pharmaceutical companies to have the opposite effect," said Dr Ballero [Telegraph].