The public health game is a tough one to play. How do you achieve educating and transforming the public’s behavior for the common good without coming off as a bully or dour spoil-sport? The stakes are impossible: The indifferent audience, the management of the reproachful “tsk-tsk, you should know better” tone, and there’s only so many ways to proselytize a message of “getting one’s act together.” And where’s the cash for such endeavors? 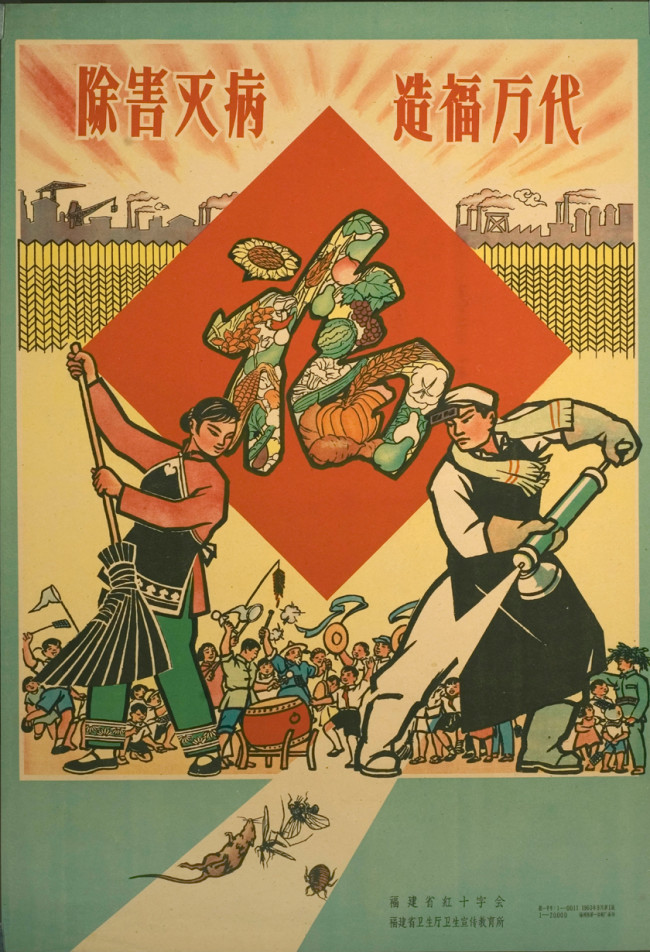 “Eradicate pests and diseases and build happiness for ten thousand generations.” A poster from September 1960 by the Red Cross and the Health Propaganda Office of the Health Department of Fujian Province. Note the industrial skyline, the healthy crop of vegetables in the center of the poster and the four pests at the bottom. Source: US National Library of Medicine

But in the 1940s, the governing officials in the People’s Republic of China bulldozed their way through these issues (and more) and succeeded in accomplishing one of the most difficult public health objectives, the eradication of disease and vermin. But in doing so, they created an environmental catastrophe that epitomizes the tenuous balance between doing what’s best for mankind with the quirks and vagaries of Mother Nature.

As the communists ascended to power in the fall of 1949, China was saturated with disabling infectious diseases. Tuberculosis, plague, cholera, polio, malaria, smallpox, and hookworm were endemic throughout much of the country. Roughly 10.5 million people were infected with the water-borne liver parasite schistosomiasis (1). Cholera epidemics raged through the population freely, some years killing tens of thousands (2).  Infant mortality was as high as 300 per 1000 live births (1). 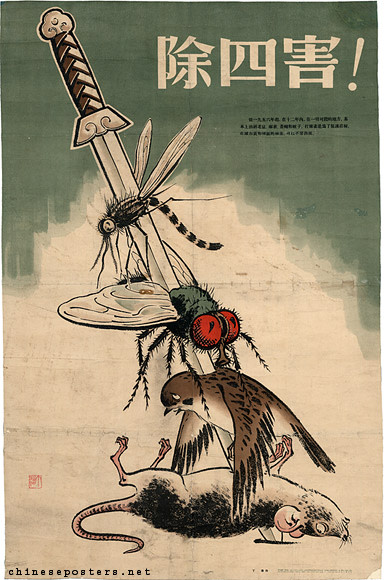 In this period of urgent political and social transition, creating a national public health system and eradicating entrenched diseases was an obvious first step in improving the  lives of the nation’s people. The Communist government began initiating massive vaccination campaigns against the plague and smallpox, vaccinating nearly 300 million people (1). Sanitation infrastructures for clean drinking water and waste disposal were implemented throughout the country. Emulating the Soviet Union’s model of healthcare, the government established subsets of medical and public health personnel to serve as health stewards to the population, directing them to venture into the rural areas and treat diseases as best as they could with what limited resources were available.

But physicians, immunizations and sanitation can only go so far. Something had to be done about the pests that transmit pestilence and diseases: the mosquitos responsible for malaria, the rodents that spread plague, and those ubiquitous airborne nuisances, flies. And what of those sparrows that eat the hard-won fruits from fields of grain and rice? These four pests – flies, mosquitos, rats and sparrows – were charged with public health treason and widespread irritation. Something had to be done, on a grand and monumental scale, and the Four Pests campaign was just the thing. 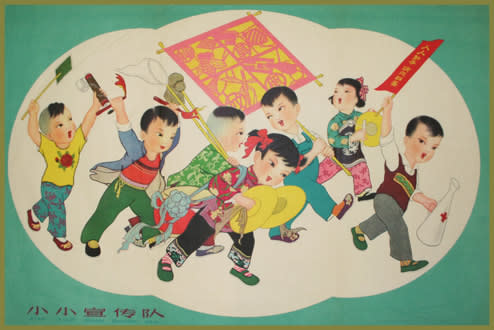 “A young propaganda troupe.” A poster from 1949 emphasizing the role of children in the “Four Pests” campaign. The pests can be seen in the pink and yellow banner near the top of the poster and the tools used for their eradication – swatters, nets, gongs and more – are held in the children’s hands. Source: US National Library of Medicine.

So began the initiation of the Great Leap Forward with a patriotic health campaign that would target vermin that spread disease, a carte blanche issued to the people to fulfill their duty to their nation through the massacre of small bothersome animals and insects. In 1958, the Chinese took up the cause with merciless efficiency and embarked upon an incredible slaughter of wildlife.

This public health good would be implemented by everyone – from troupes of children to the elderly – with beautifully illustrated posters released to the masses that encouraged the wielding of fly swatters, guns and gongs against the regime’s diminutive enemies.

Public health posters serve as billboards of knowledge and empowerment, but these particular forms of propaganda are also a historical snapshot, a birth announcement from a new political and public health system.

These Chinese posters epitomize the Republic’s principals, culture and history, of technological and aesthetic styles. Borrowing heavily from the Soviet Union’s highly refined systems of propaganda dissemination and their artistic styles of socialist realism, they radiate dynamism, good will and optimism. They’re a visual representation of one of the most ambitious public health movements in history but they also speak of gross tampering with delicate ecosystems, of an ignorance of the subtle bonds that hold the world around us together.

The causalities of this ambitious “Four Pests” public health campaign? Yes, many infectious diseases were eradicated and their scope diminished but also “1 billion sparrows, 1.5 billion rats, 100 million kilograms of flies and 11 million kilograms of mosquitos” were outright decimated (1). The public health campaign worked well. Too well. The sparrow’s intrinsic role in the ecological balance was unrealized and resulted in an unmitigated, well-orchestrated environmental disaster. Locusts came in droves and devoured fields of grain, their feeding left unencumbered by watchful, hungry sparrows. Novel agricultural techniques recently implemented through the Great Leap Forward further contributed to the disastrous effects of the campaign.

The mass deaths of sparrows and nationwide loss of crops resulted in untold millions starving and 20 to 30 million people dying from 1958 to 1962. A 1984 article on the mass famine put it simply: “China suffered a demographic crisis of enormous proportions” (3).

The “Four Pests” campaign was inordinately successful in achieving its primary goal of vermin eradication. But one of the most successful public health campaigns in history – in terms of establishing a goal and clearly achieving it – came at an extraordinarily grave cost for the Chinese, ecologically and demographically. A sinister truth had emerged: tamper with the unseen balancing beam of predators and prey at your peril or else nature will create a level playing field at your expense.

Learn more about the representation of history, culture  and politics as represented by propaganda posters at Chinese Posters, run by the International Institute of Social History. They have an outstanding collection of posters, including a nice selection of more “Four Pest” campaign posters.

From the U.S National Library of Medicine, check out their short web exhibition, “Health for the People: Continuity and Change in Asian Medicine.”

This list of campaigns of the Communist Party of China is a fascinating trip down history. 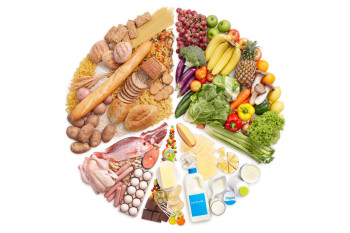 HealthWhat Are Macronutrients and Why Do People Keep Talking About Them? 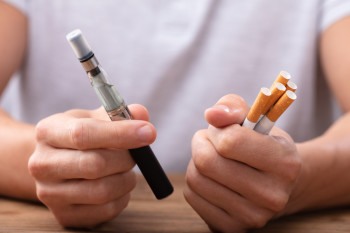 HealthIs Vaping Healthier Than Smoking? Here's What One Lung Specialist Can Tell Us