Nutrition Science Has a Credibility Problem. We Might Blame Gut Microbes 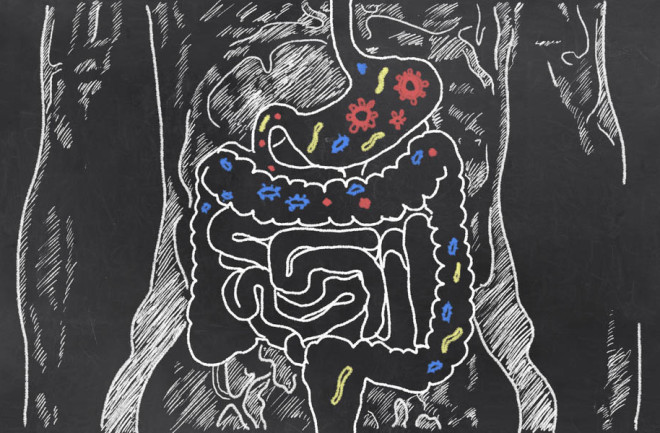 After decades of research have yielded nothing but flip-flopping dietary advice sprinkled with the occasional scientific scandal, many health-conscious people are placing their trust elsewhere.

Just walk down any aisle of a Whole Foods to find health claims ranging from benignly naturopathic, to pseudo-scientific, to outright anti-scientific. It seems people would rather put faith in a fad diet promoted by a blogger, some guy with a book deal, or their cousin’s sister-in-law on Facebook than advice from doctors and nutrition researchers.

We can’t blame them. Just last month, one of the most prominent researchers in diet and nutrition, Brian Wansink, was removed from his positions at Cornell University after facing allegations of research misconduct. You might remember hearing that your plate size affects how full you feel, or that people duped with a refilling trick bowl eat way more soup than they do when they have to ask for a refill. That guy. As it turns out, some inconsistencies in Wansink’s published work revealed shady data practices. He wasn’t making up numbers; far from it – he just used methods in his data analysis that are known to find associations where there are none.

Now, attention is being brought to a broader issue: What kind of system would lead a nutrition researcher down this sketchy path? Some are blaming research culture for making nutrition studies the way they are – not by incentivizing research misconduct per se, but incentivizing flashy findings and a long list of scientific publications.

But if this were the case, all of science would flip-flop constantly. Because all of academic research is incentivized this way.

So instead of looking for answers from the researchers or their broader academic context, which are perhaps not so unique, why not stick to looking at the thing that all nutrition research has in common?

Inge Lindseth is a clinical nutrition physiologist at the Balderklinikken in Oslo, Norway. He and his colleague Marit Zinöcker published a review earlier this year on why ultra-processed foods could cause health problems because of the way they feed our gut microbes.

The review was interesting in terms of what it could mean for what we should eat, but it was also interesting in the way it even approached the question. Lindseth and Zinöcker looked at the ways these foods could impact health from every angle, keeping the whole complex puzzle together instead of picking any individual piece apart.

Lindseth says that was intentional: The puzzle-piece focus of most nutrition research is simply not going to get us anywhere.

“We have seen so little progress in terms of what we tell the public to eat,” he says.  “You could do a million studies more (the old way) and it’s not going to do much,” he later added.

The problem comes from a mentality that there will be a singular answer at the root of all our health problems. Researchers and the public are eager for evidence that says: It’s carbs. Or sugar, or deliciousness, or fat, or portion sizes, or advertising, or availability in low-income communities, or genetics, or any of the other supposed obesity-drivers we hear about.

And so scientists have researched this way, doing epidemiological studies that follow groups of people over time, looking for an association between one specific food or habit and adverse health effects.

But in reality, when trying to study any one of these factors alone, it’s nearly impossible to keep the rest constant. More importantly, even if you could, that’s not how people operate.

It seems obvious. As Lindseth puts it, “I’m realizing that a lot of intelligent people don’t take the time to think.”

They wrote a commentary this summer that suggests the reason epidemiological studies are so variable in their conclusions could be because of the variation in the gut microbes of the research subjects.

In short, the researchers propose, nutrition studies are so flip-floppy because different gut microbes alter the answers of what are already too-narrowly focused questions.

It would certainly be nice to have something to point a finger at besides researchers drawing hasty conclusions, journalists over-hyping them, or worse, widespread research misconduct.

But, the researchers emphasize, more research is needed before we can be sure about the role of microbes.

Critics will be quick to point out that the reason epidemiological studies are so big, often with hundreds of participants, is in hopes that their large sample size will swamp out any complications from confounding factors like gut bacteria.

Other researchers are skeptical of the relative importance of the gut microbiome at all, and have presented evidence that effects are small in context of other factors.

But above all, Lindseth just seems to hope we’ll start paying attention to the big picture of our health, considering all the pieces together. Preferably while we eat some whole, unprocessed foods.

“The point is, that without a sufficient view of the bigger picture and a real interest in doing hours and hours of contemplation about the possible mechanisms at hand, we are not going to get very far.”

More From Discover
Environment
Investors Are Betting on Seafood Alternatives
Health
Dietary Supplements Are No Substitute For a Healthy Lifestyle
The Sciences
Craft Brewers are Using Stinky Yeast to Make Tasty Beer
Health
Microgreens Pack a Macro Nutritional Punch
The Sciences
Who Were Scotland’s Mysterious ‘Bodies in the Bog’?
Health
Therapy on a Plate: How Your Diet Can Benefit Your Mental Health
Recommendations From Our Store
My Science ShopDiscover STEM Kits
My Science ShopDiscover 2022 Calendar
My Science ShopStrange Science
My Science ShopElements Flashcards
Shop Now
Stay Curious
Join
Our List