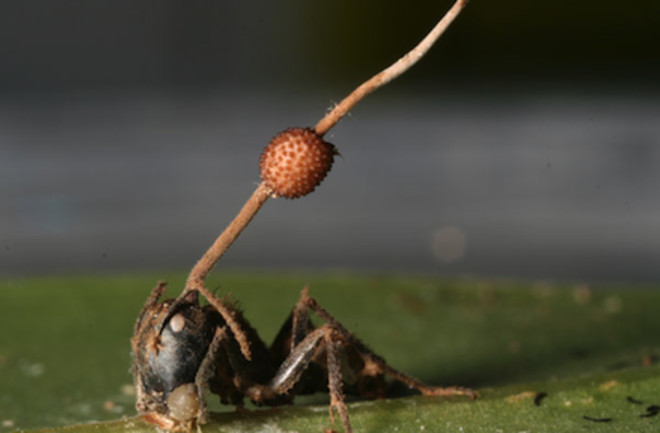 I had planned to spend today NOT writing about parasites, but this morning I've already gotten comments and tweets informing me about a very cool new paper that was published today, documenting parasitized zombies 48 million years ago. All right, then. The parasite overlords cannot be ignored. The parasite in question is the fiendishly awesome Cordyceps, a fungus that forces its insect hosts to climb up high on plants, clamp down, and hold fast. The fungus then sprouts out of the ant's body, showering down spores on hapless insects below. I wrote about Cordyceps in my book Parasite Rex, and followed up last year with a blog post on some great work by David Hughes of the University of Exeter and Harvard. Hughes and his colleagues wondered if the fungus was controlling its host in a fine-tuned adaptation, or if the ants were becoming zombies because they were just sick. After all, if your body was shot through with fungus threads, you'd probably feel lousy as well. But Hughes made a strong case that Cordyceps really is in charge, because it so consistently sends its hosts to the same kind of place in the canopy, finding a location that benefits the parasite. The parasitized insects even bite down on the same place on a leaf. Out of this research, Hughes got a brilliant yet very simple idea. If Cordyceps causes its hosts to behave in such a fixed way, maybe that behavior has been preserved in the fossil record. Hughes and his colleagues went through a big collection of 48-million-year-old fossil leaves in Germany and discovered a leaf with distinctive snips that closely match those made today by Cordyceps-infected ants. There's precious little evidence of parasitism in the fossil record. It's not surprising when you consider the delicate, squishy nature of most parasites. Most of the evidence scientists have found is indirect. The bacteria Mycobacteria tuberculosis, for example, leaves scars on the bones of some of its victims, including--possibly--a 500,000-year-old hominid with TB. Hughes's new paper is important because it points not just to a particular parasite 48 million years ago, but a particular form of parasite manipulation. Ancient fungi appear to have evolved all the sophisticated biochemistry they needed to control an animal a very long time ago, and they've been using it to manipulate insect hosts ever since. This new research is just a tiny glimpse into what is, I'm sure, a vast world of paleoparasitology. Parasitism is the most successful way of life today, and there's no reason to think that wasn't true 100 million years ago. Where there are hosts, there are parasites, and lots of them. Let's see if scientists can continue to think up new ways to open up that world and document the parasitic history of life on Earth. Whether they'll discover dinosaur tapeworms, I don't know. But I can hope. (You can read more about Cordyceps from Ed Yong and Nature) [Image: David Hughes]