No, House Plants Can’t Purify the Air in Your Home

To purify your air with house plants, you'd need anywhere from 10 to 100 plants per square meter — enough to turn your apartment into a jungle. 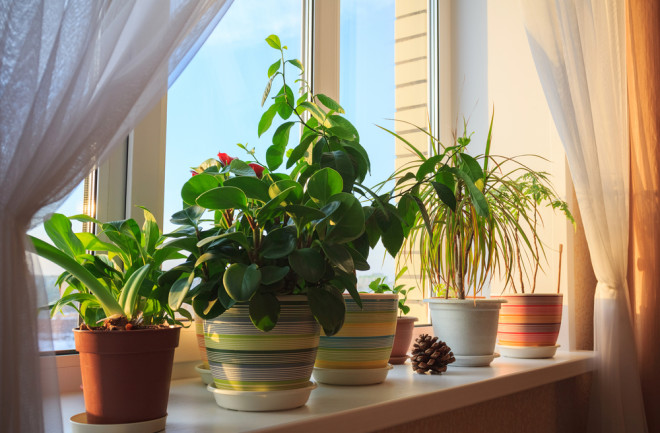 Your houseplants look nice, and they might even make you happier, but they’re unlikely to clean the air. (Credit: Anatolii Mikhailov/Shutterstock)

If you go for a walk in the forest, the air feels fresh. People often attribute that to trees’ and plants’ air-purifying abilities. They suck up CO2 and exhale oxygen, removing pollutants from the air. So it seems the same should go for the air inside our houses as well.

Humans have tried to bring the forest to their homes for decades, installing ferns, ficuses, bromeliads, peace lilies and more in our urban abodes. Besides looking nice, the assumption is that the greenery will grant us cleaner air through the magic of plant respiration.

But like your watering can, a new study pours cold water on our assumptions about plants’ purifying abilities. To clear out the chemical compounds wafting through our homes, we’d need to install a literal jungle, according to two Drexel University researchers.

To purify your air with house plants, you’d need anywhere from 10 to 100 plants per square meter — enough that you could get lost in your own apartment. That means those windowsill succulents and that drooping snake plant your sister gave you are little more than aspirational ornaments.

There have been numerous studies of plants’ abilities to clean the air over the years, most of them focusing on volatile organic compounds, or VOCs. These airborne particles come from a variety of common indoor products like paint, cleaning products, air fresheners and furnishings. VOCs have been linked to a number of health problems both mild and more worrisome: eye, nose and throat irritation, plus headaches, nausea and fatigue, among other things.

In a number of experiments, researchers have wafted air that holds various VOCs over plants in the laboratory, watching to see if the chemical concentrations would decrease. The results of these studies were actually fairly promising: plants consistently helped to remove harmful chemicals from the air. Those studies led to the now-common wisdom that houseplants lead to cleaner air.

But there’s a big problem with most of those studies, according to Drexel’s Bryan Cummings and Michael Waring, who published their research Tuesday in the Journal of Exposure Science and Environmental Epidemiology. Many of these studies tested plants’ cleansing abilities in sealed chambers, and gave them hours or days to get to work. That’s far removed from the environment in a typical home, where new air is circulated around constantly, and at far greater volumes than in the experiments. What’s more, the things that emit VOCs do so continually, meaning there’s always a new supply of chemicals in the air.

This isn’t the first sign that plants may not have a significant impact either. In the few studies that looked at more realistic conditions, researchers actually showed that plants were woefully unable to keep up. One study from 2000 found that it took 20 plants in a room to see even a small reduction in concentrations of formaldehyde. Another found some reductions, though they didn’t seem to scale (six plants weren’t better than three plants, for example), an indication that the results might be due to chance. Those researchers also sampled the air for just five minutes a week during the study.

To try and clear the air, Cummings and Waring looked at 12 different studies of plants’ purification abilities and tried to standardize the often disparate metrics they all used. They settled on a metric called clean air delivery rates (CADR), which can take differences in air volume into account.

Though the studies varied considerably in the rates of air cleaning, they found the median was around 0.023 cubic meters per plant per hour. For comparison, a typical air purifier has a CADR of around 100 cubic meters per hour, they authors say. That means you’d need hundreds of plants to match the abilities of an air purifier.

So, your houseplants probably aren’t going to deliver you the forest-scented air plant enthusiasts dream of. Of course, if you want to freshen up the indoors and help expel some of the chemicals circulating there’s an even easier option: just open a window.

And we shouldn’t dismiss houseplants entirely. While they may not be helping our lungs much, other studies have found that the presence of greenery in our homes and workspaces helps in other ways.

There are reasons to be skeptical of these studies as well, of course. Most of them are small, and their methodologies differ enough that it’s difficult to compare results.

Still, it’s not a stretch to say that plants are nice to have around, even if their health benefits are unclear. And though we’ve all killed a plant (or five) in our time, a slew of new companies are vying to deliver a burst of greenery to your door.

“Plants Make People Happy” proclaims Sill, a startup that ships plants nationwide. It’s a nice sentiment — and a marketing ploy too vague for science to debunk.