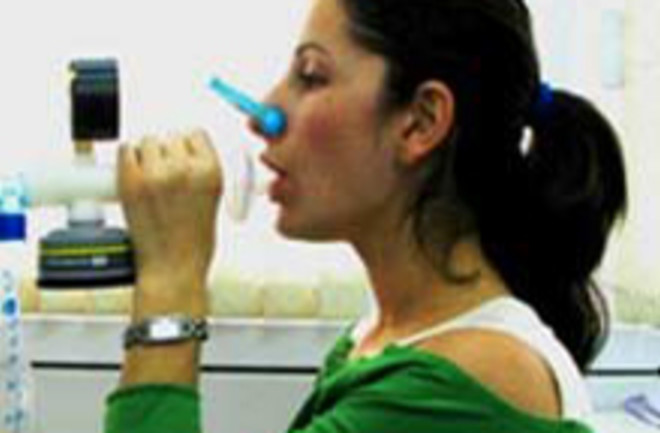 In a doctor's office in the near future, part of a smoker's routine checkup could involve blowing into a tube connected to a small sensor. The doctor will look at the sensor's display and know immediately whether she has to deliver the grim diagnosis: lung cancer. Researchers in Israel have invented a new "breathalyzer" that can detect chemical compounds produced by lung cancer cells.

The finished device should be portable and inexpensive and provide a faster, easier, and more sensitive way to screen for tumours than X-rays or blood tests. Such screening should help doctors detect cancer early, when it’s most treatable [Telegraph].

The new device, described in Nature Nanotechnology, is not the first to find evidence of cancer on a person's breath.

Other attempts to do this have yielded promising results, ... but those devices require a higher concentration of the telltale biomarker chemicals than the Israeli device. The chemicals, called volatile organic compounds (VOCs), are metabolic products present in the vapors that we breathe out, but they occur in such small amounts that researchers have had to find ways to increase their concentrations before testing [Technology Review].

But the new sensor has such sensitivity that it can detect traces of the compound in their natural concentrations in human breath, and it can therefore give results immediately, without processing and analyzing the sample in a lab. The sensor relies on a film of gold nanoparticles, which conducts electricity, layered over a carbon-based substrate.

When a patient breathes into the device, particulates in the breath accumulate on the carbon layer and the sensor swells pushing the gold nanoparticles further apart, which, in turn, alters the resistance of the film. Each type of particulate has a unique effect on the resistance which can be measured by having a current flow through the sensor. "The user gets a figure on the device's display panel that indicates whether the person is healthy or has cancer" [Physics World]

Lung cancer kills 1.3 million people a year and is the leading cause of cancer death across the world. Only 15 percent of patients live more than 5 years, in part because the disease is usually diagnosed so late [Reuters].

The new sensor was able to clearly differentiate between healthy people and patients with stage-3 or stage-4 lung cancer, meaning that the disease had already progressed significantly. The researchers note that the sensor would be of even greater medical value if it can pick out people in the earlier stages of the disease. Related Content: 80beats: New Research Points Toward Artificial Nose Based on Human Smell Sensors DISCOVER: Lassie--Get the Oncologist!Image: Nature Nanotechnology