Missed Immune Connection in the Brain

Lymphatic tubes are discovered in the place you'd least expect: the brain. 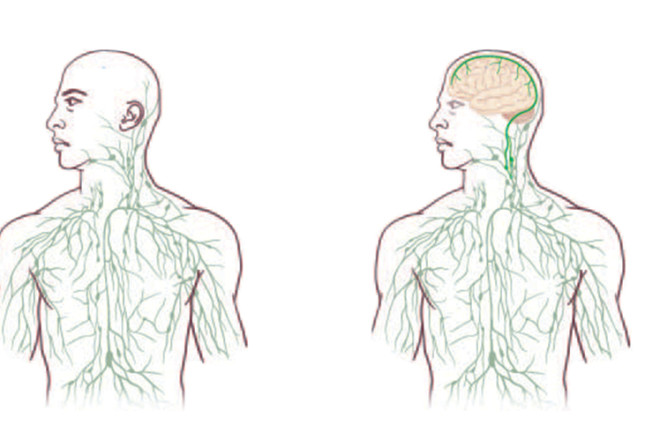 It shouldn’t have been there, but there was no denying that it was there: a channel guiding immune cells directly into the brain. The serendipitous discovery by a University of Virginia team may eventually help explain many neurological diseases.

Previously, researchers assumed immune cells took an indirect route around the brain, flowing freely through its surrounding fluid. That’s because lymphatic vessels, which transport immune cells throughout the body, stopped at the upper neck. So neuroimmunologist Jonathan Kipnis and his team weren’t looking for lymphatic vessels actually entering the brain. “You don’t look for something that doesn’t exist,” Kipnis says.

But when Antoine Louveau, a researcher in Kipnis’ lab, developed a dissection technique that wholly preserves the fragile membranes covering the mouse brain, it revealed something never seen before: Immune cells in the membranes were clearly organized, as if traveling within tubes. Staining confirmed there were tubes and that they were indeed lymphatic vessels — the first proof they existed in the brain.

The findings, published in Nature in July, could unearth the secrets of neurological diseases and disorders, like multiple sclerosis and Alzheimer’s, that may involve the immune system. “It is very possible that the answer to this question is within the lymphatic vessels,” Kipnis says.