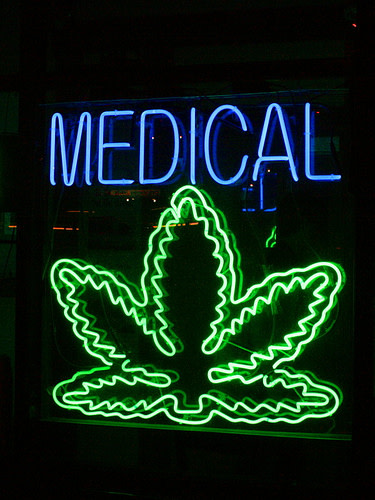 If you remember anything from statistics class, it's probably that correlation ain't no causation. Just because two numbers happen to go up at the same time doesn't mean that one is causing the other to rise (or fall, or hold steady, or whatever). If there isn't a plausible explanation for how the two might be connected, and proof that that explanation is indeed the cause, all you have is a couple of lines on a chart. So it's a move in the right direction when people try to suss out connections between two variables they have a hunch are related. But seeking such a connection can lead to some pretty convoluted reasoning. A new paper---unpublished, but released for discussion

---claims that the passage of states' medical marijuana laws cause decreased traffic fatalities, following on the researchers' intuition that people might smoke pot instead of drinking alcohol if marijuana were more readily obtainable, and that driving while high is less dangerous than driving drunk. Their logic goes like this: if medical marijuana laws make pot more easily available, and people smoke more pot after laws are passed, and they buy less alcohol because of that, then there would be fewer traffic deaths. The connection between alcohol sales and traffic deaths, at least, sounds plausible, and traffic deaths did drop after medical marijuana laws were passed. But as they go through the statistics that they claim are behind each of these links, a thick cloud of question marks descends. There isn't crystal-clear evidence that medical marijuana laws actually do get people to smoke more pot---the three states they discuss, Montana, Rhode Island, and Vermont, have widely varying numbers of people signed up for medical marijuana, and although there was an increase in reported marijuana use in two of the states for some age groups, it wasn't huge. Huge isn't necessarily required, if the change is statistically significant, but one has to assume that there is lots of fibbing and thus uncertainty in any count of illegal (even kinda-sorta-legal) drug use. The statement that people who smoke pot consume less alcohol is also tenuous---the authors admit that research has provided no clear answer on whether people drink more or less when they smoke pot, and simply note that after legalization, phone surveys showed a drop in binge drinking. That, of course, is a correlation. There do seem to be convincing arguments that although pot, like alcohol, slows your reaction time, high drivers drive more carefully than drunk ones---read more on that at Slate

. But that's more of an interesting factoid than an important contribution to the argument, given all the fuzziness elsewhere. Can you think of other routes by which medical marijuana laws might affect traffic fatalities? Or other statistics to chase down that might link those laws to other changes? Think of it as an exercise in building scientific character, choose-your-own-adventure style. The paper is available for free here

---check out their arguments for yourself.