Gastric bypass surgeries can often lead to dramatic weight loss. For one patient, though, there were some unexpected complications. 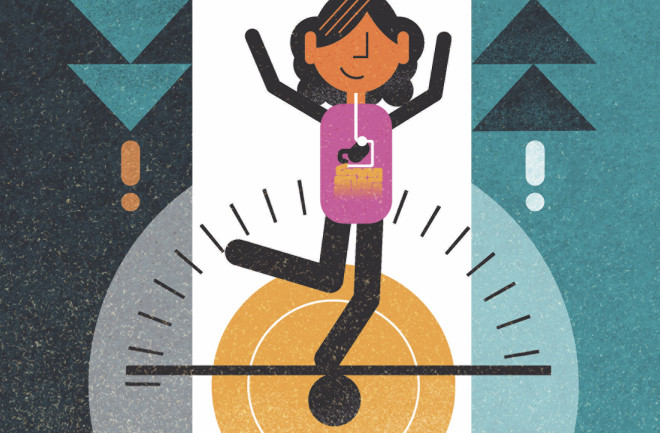 This article appeared in the July/August 2021 issue of Discover magazine as "Slim to None." Subscribe for more stories like these.

Ann was a long-standing patient of mine whom I saw for severe gastroesophageal reflux disease, also known as GERD. She was extremely overweight and met medical criteria for morbid obesity. Doctors consider a patient morbidly obese when they are at least 100 pounds over their ideal body weight — and/or when their weight may significantly contribute to medical conditions, like diabetes, high blood pressure, or fatty liver disease, that put their life in danger. Ann was 5 feet 4 inches tall and weighed 250 pounds. She had been a slim 130-pound athlete as a teenager, but had gained weight with each of her pregnancies.

During one of our clinic visits, the topic of her possibly undergoing surgery to lose weight came up. I was supportive of Ann seeing a surgeon who specialized in this area. Such procedures, known as bariatric surgeries, have become extremely popular with patients, given their high success rates and the often dramatic and life-changing results that they can produce.

Several bariatric surgeries exist, but after meeting with our surgeon, Ann had decided to undergo a specific bariatric procedure known as a Roux-en-Y gastric bypass. This particular operation typically results in the most dramatic and durable weight loss for patients. The surgery involves the creation of a small “pouch” made from a portion of the stomach. This pouch can only hold a small amount of food at a given time and is connected to a section of small intestine. The remaining portion of the stomach, which is connected to the top of the small bowel, is simply left in place.

But after the procedure, ingested food no longer flows through these regions of the gastrointestinal tract; this is the “bypass” that is referred to in the operation’s name. Food that is swallowed bypasses the beginning of the small intestine and enters the bowel, where it is digested much further down the line. After this surgery, patients lose weight by several means. For one, the surgery restricts how much they can eat at a given time because the pouch is so small compared to a normal stomach. Beyond that, much of the small bowel, where food is typically absorbed, never sees ingested food anymore. As a bonus, the Roux-en-Y gastric bypass is also very effective at treating GERD. Ann underwent the surgery without any complications.

The first year after the surgery was a very exciting time for Ann. She lost almost 75 pounds, her self-image soared, and she treated herself to an entirely new wardrobe. Victory, it appeared, was at hand.

I was therefore understandably surprised to see Ann back in my clinic just three months after her one-year surgical anniversary. Looking troubled, she told me that she felt weak and tired all the time. She had noticed a plethora of new problems, including vision changes and easy bruising, with even minor bumps resulting in ugly red blotches on her arms and legs. Most concerning, Ann’s weight loss was continuing beyond the point that would be expected following a gastric bypass. She had now lost over 100 pounds and had gone from looking robust to, quite frankly, sickly. Most patients experience a weight-loss plateau at around the one-year mark, but Ann’s weight had continued to decline.

Ann was seriously worried she had developed a cancerous tumor that would explain her weight loss — a not-unreasonable fear. But a CT scan of her abdomen and pelvis did not disclose any obvious abnormalities. I also performed an upper endoscopy and a colonoscopy on Ann to make sure nothing was amiss with her gastric bypass and to further make sure she did not have colon cancer; the procedures failed to reveal anything that might explain her weight loss. But blood tests that I performed showed that Ann was suffering from significant malnutrition. In addition, her easy bruising prompted me to check her vitamin levels, since vitamin K deficiency is frequently associated with bruising. Her vitamin K level was extremely low, as was her vitamin A level.

Now we also had an answer for her vision changes, as vitamin A is required for healthy vision. Both vitamin K and A are among the so-called “fatsoluble” vitamins, meaning that they don’t dissolve in water, but in fat. Vitamin A and K deficiencies are rare, and Ann was taking a multivitamin that included both of these. This suggested that Ann’s intake of the vitamins themselves was sufficient, but her body simply wasn’t absorbing enough of the nutrients they contained.

When I asked Ann if she was having diarrhea, she said she was having up to four bowel movements per day. I asked her if her stools looked oily or greasy. Her eyes widened and she nodded. “I haven’t told anyone that yet,” she said. The medical term for greasy stools is steatorrhea, and the presence of fat in stool is concerning. The human body is extremely efficient at absorbing fat from food, likely reflecting earlier eras when fat was a rare dietary commodity. Fat in the stool, however, is a telltale sign that the body is unable to absorb ingested food properly. Fat-soluble vitamins are absorbed passively by the body along with ingested fat, but if you can’t absorb fat, you can’t absorb fat-soluble vitamins, and deficiencies will develop.

While most people think their stomach digests their food, it’s actually the pancreas that does most of the work. The pancreas produces enzymes that break down carbohydrates, fats, and proteins into their basic building blocks, which the small intestine can then absorb. Steatorrhea is most commonly seen in patients with chronic pancreatitis. That condition usually develops due to alcohol abuse, genetic factors, or other causes. In these patients, the pancreas becomes scarred and atrophic and can no longer make or release enough pancreatic enzymes.

The pancreas is typically responsible for digesting food.(Credit: Kellie Jaeger/Discover)

But Ann did not have chronic pancreatitis — her CT scan had shown a normal pancreas. Still, I began to wonder if Ann was suffering from asynchrony. Asynchrony can sometimes develop after complex bowel reconstructions, including a Rouxen-Y gastric bypass. In order for normal digestion to occur, all parts of the gut not only have to work the right way, but also at the right time and in the right place, like a finely choreographed ballet. Ann’s gastric bypass meant that her food was going down one limb of small bowel, but her pancreas was dumping digestive enzymes into another, and there was no food going through that area at all. As a result, the food was not interacting with the enzymes that were required to break it down. Her body was simply passing undigested food through her.

I gave Ann a prescription for pancreatic enzymes— pills containing digestive enzymes obtained from pigs, believe it or not. When taken with a meal, these enzymes activate and break down food just like enzymes from a human pancreas. Then, the small intestine can absorb these smaller molecules. Within a few days of starting the medication, Ann’s stools had normalized and her weight loss stopped. A blood test obtained a few weeks later showed that her vitamin levels were on the rise.

Ann would need to take supplemental enzymes for the rest of her life, so her body could maintain a desirable weight and her absorption of food would be normal. She was not happy about the additional pills, but they worked. The gastric bypass giveth, and the gastric bypass taketh away.

Douglas G. Adler is co-director of the Center for Advanced Therapeutic Endoscopy in Denver. The cases described in Vital Signs are real, but names and certain details have been changed.