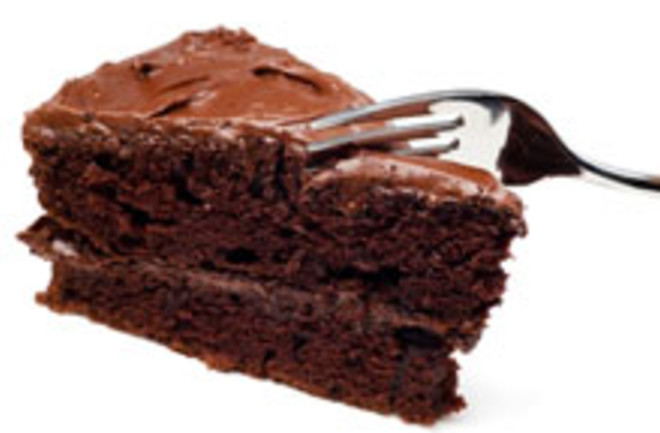 Will showing pictures of cake to dieting women send them running for the Entenmann's outlet? Or strengthen their resolve to avoid sweets? The answer is option B, according to a study of 54 women out of Utrecht University in the Netherlands. New Scientistreports:

[Study leader Floor] Kroese and her colleagues asked 54 female students to look at a picture of either a slice of chocolate cake or a flower under the guise of a memory test. The researchers then questioned the students about any plans to eat more healthily and offered them a choice between a chocolate or oatmeal cookie.

Women shown the cake picture gave a higher priority to their healthy eating intentions than their counterparts shown the flower. They were also significantly more likely to pick the oatmeal cookie – which earlier tests showed was generally perceived as the healthier option.

Kroese speculates that in this case, viewing pictures of the objects of their temptation—not the cake itself, mind you, but pics of it—" reminded people of their goal to watch their weight, and helped them act accordingly." Of course, it's doubtful that we should start papering billboards with German chocolate cake to curb the obesity epidemic:

Kroese suggests that sticking pictures of tempting foods on the fridge door may help to bring weight-watching goals to mind. But she cautions that the results can only be applied to women wanting to lose weight: it is unclear whether they would hold in the general population.

Discoblog: Obesity, Up Close: The Making of Pork Rinds

Discoblog: Why Do Some People Never Get Fat? Scientists May Have the Answer