Lesbian Parents & Their Well-Adjusted Kids: What the Study Really Means 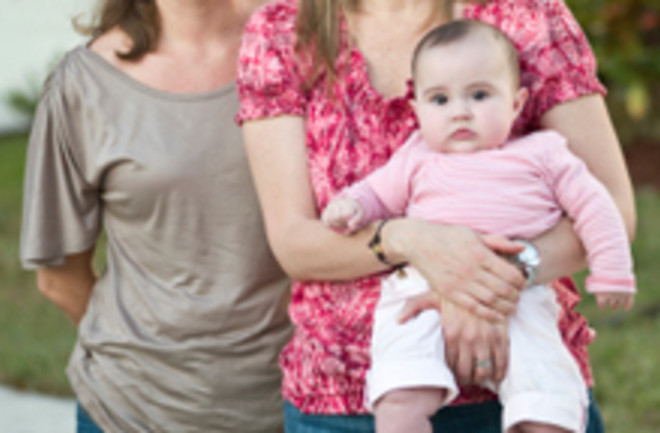 The U.S. National Longitudinal Lesbian Family Study, a quarter-century look at the welfare of kids born to lesbian couples, has finally come out in the journal Pediatrics this week with the headline-grabbing finding that those children not only do as well as the rest of the population, they might actually fare better. You can download the paper by lead author Nanette Gartrell for free right now, but here are the key parts: Select population only Census data says that there are more than 270,000 American kids in same-sex households, with twice that many having a single gay parent. Gartrell's study follows a particular slice: Lesbian couples who were together before the child's birth, identified themselves as a lesbian couple, and went through the artificial insemination process. It didn't include, for instance, women who may have had a child in a previous heterosexual relationship and then entered into a lesbian one later. Better than the rest? The study, which began in 1986, ended up following 78 kids from lesbian couples who were recruited for the study in Boston, Washington D.C., and San Francisco.

The mothers were interviewed during pregnancy or the insemination process, and additionally when the children were 2, 5, 10 and 17 years old. Those children are now 18 to 23 years old. They were interviewed four times as they matured and also completed an online questionnaire at age 17, focusing on their psychological adjustment, peer and family relationships and academic progress [CNN].

The children of these lesbian couples were just as well-adjusted as the kids of heterosexual couples to whom the researchers compared them. Indeed, the kids in the study proved superior in some areas, like academics, self-esteem, and behavior, as shown by the standard "Child Behavior Checklists" that were part of the surveys. Planning, and parenting This is a quantitative study, so the "why" question becomes the subject of speculation. But for Gartrell, the fact that she studied families with planned pregnancies and involved parents was the key. Salon's Tracy Clark-Flory puts the first point more forcefully:

One factor that seems awfully important here is that these pregnancies were all planned. Like, really, really planned. There were no forgotten pills, broken condoms or one too many glasses of red wine; these women had to actively seek out sperm donors and then undergo artificial insemination [Salon].

The parents in her study, Gartrell says, "reported using verbal limit-setting more often with their children" (as opposed to any kind of corporal punishment). They had dealt early with the difficult conversations about sexuality and prejudice, she says. That may have contributed to the fact that at 10 the kids of lesbian families appeared to have experienced more anxiety from being stigmatized, but by 17 that effect no longer showed up.

"They are very involved in their children's lives," she says of the lesbian parents. "And that is a great recipe for healthy outcomes for children" [TIME].

That is, good parenting is what matters, not gay parenting. D-I-V-O-R-C-E Buried in the study is a curious stat: When heterosexual first marriages end in divorce, 65% of the time mothers end up with sole custody. But, in the study of lesbian couples, things ended up much differently. The percentage of separation was about the same: about 50% for heterosexual couples and 56% for the lesbian couples in the study. But when the study couples split up, they retained joint custody in 70% of the cases. The paper says, "Custody was more likely to be shared in these families when the mothers had previously completed a co-parent (second parent) adoption agreement." Weaknesses The study's long-term view of families headed by lesbian couples is its strength, along with the fact that gathering study participants before they gave birth meant the study wouldn't be skewed by "families who volunteer when it is already clear that their offspring are performing well." But it does have weaknesses. For one, Gartrell's funding came in part from gay and lesbian organizations like the Gill Foundation and the Lesbian Health Fund from the Gay Lesbian Medical Association. That has led anti-gay organization to respond to the study with charges of bias. Indeed, if Gartrell had been able to secure complete funding from an independent source like the National Institutes of Health, that would have been nice. But there have been easier things to do in the last quarter-century than glean government grants to study families led by same-sex couples. A more pressing scientific question is: How much you can extrapolate the study's data to 2010? As the study says, the differences between 1986 and today made recruiting a nationally representative sample quite difficult:

The NLLFS sample is drawn from the first-wave planned lesbian families who were initially clustered around metropolitan areas with visible lesbian communities, which were much less diverse than they are today; recruiting was limited to the relatively small number of prospective mothers who felt safe enough to identify publicly as lesbian, who had the economic resources to afford DI, and who, in the pre-Internet era, were affiliated with the communities in which the study was advertised.