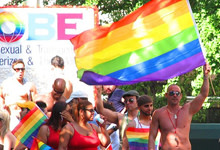 Gay young adults who were rejected by their families when they came out as teenagers are much more likely to attempt suicide, have unprotected sex, and have problems with drug use and depression, according to a new study.

The findings are based on surveys of 224 gay, lesbian, bisexual and transgender adults in California who ranged in age from 21 to 25. Gay Latinos were most likely to experience a poor reception from their parents, and had the highest rates of risk factors for HIV and mental health problems, according to the research [Scientific American].

The findings, published in the journal Pediatrics [subscription required],

don't prove that a family's negative reaction to a child's sexuality directly causes problems later in life. But it's clear that "there's a connection between how families treat gay and lesbian children and their mental and physical health" [HealthDay News]

said social worker Caitlin Ryan, the study's lead author. She found that teenagers who were rejected by their families were eight times as likely to attempt suicide, six times as likely to report serious depression, and three times as likely to have unprotected sex and use drugs. Ryan believes that families that reject a gay son or daughter often disapprove of homosexuality on religious grounds, and can be well-intentioned in their efforts to change their child's sexual orientation.

In terms of rejection, "we saw that in so many cases, families and caregivers thought what they were doing would help their children have a better life, fit in, belong and be accepted by others," Ryan said. "They'd try to change their gender identity, forbid them from spending time with a gay friend, not let them have access to information about what it's like to be a gay, lesbian or bisexual person." In some cases, parents wouldn't stand up for their children when they had problems at school, Ryan said. "Their parents would say, 'Of course that's going to happen to you.' They'll blame the victim" [HealthDay News].

Interestingly, Ryan's study found that forbidding a teenager from hanging out with gay friends carried as much risk of later mental health problems as physical and verbal abuse. In the paper, Ryan suggests that pediatricians ask their young patients whether they've experienced any family problems relating to their sexual orientation. Although the recommendation is likely to be controversial, she says that

such conversations are necessary because young people have been coming out at younger ages. Consistent with other studies, the youths in Ryan's study were on average under 11 years old when they first experienced a same-sex attraction, were just over 14 when they realized they were gay and came out to their families before they had turned 16 [AP].