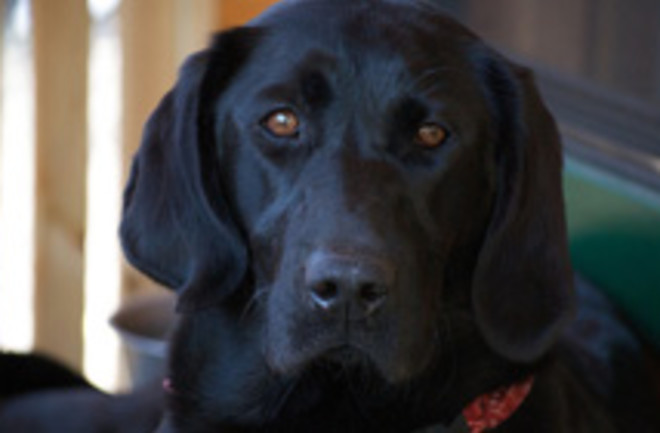 The latest diagnostic tool for oncology comes on four paws and is defined by its very effective nose. In a small study, Japanese researchers found that a dog could detect cases of colorectal cancer by sniffing patients' breath or stool samples. Previous experiments have shown that dogs can sniff out cases of skin, lung, bladder, and breast cancers; researchers think the tumors give off chemical signals that the dog can detect in bodily substances. The cancer expert in this case was an eight-year-old black Labrador named Marine who was trained to search for disease traces at the St. Sugar Cancer Sniffing Dog Training Center in Chiba, Japan. She must have been a good student. The research, published in the journal Gut, showed that she had a high success rate:

The Labrador retriever was at least 95 percent as accurate as colonoscopy when smelling breath samples, and 98 percent correct with stool samples, according to the study.... The dog’s sense of smell was especially effective in early-stage cancer, and could discern polyps from malignancies, which colonoscopy can’t. [Bloomberg]

Lead researcher Hideto Sonoda says it would be impractical to use dogs for routine bowel cancer screenings, but adds that further research into dogs' diagnostic ability could lead to the development of an electronic nose.

Dr Sonoda told the BBC: "The specific cancer scent indeed exists, but the chemical compounds are not clear. Only the dog knows the true answer. It is therefore necessary to identify the cancer specific volatile organic compounds [smells] detected by dogs and to develop an early cancer detection sensor that can be substituted for canine scent judgement. To complete the sensor useful in clinical practice as a new diagnostic method is still expected to take some time." [BBC]

80beats: Sniffing Out Sickness: Mouse Noses Respond to the Urine of Diseased Mice