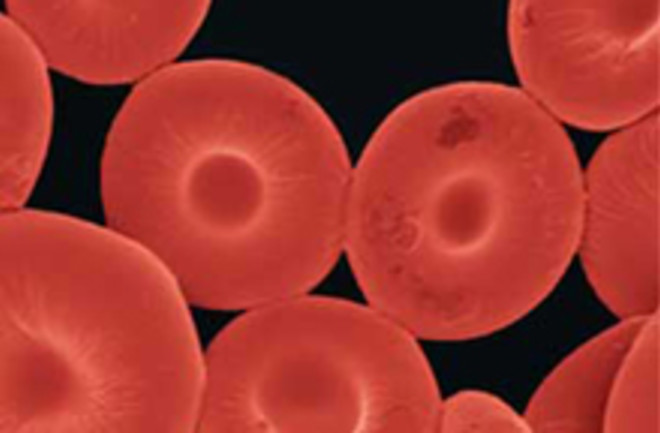 They may look simple, but our red blood cells are the sophisticated result of evolution. So to create new ways to study our bodies and perhaps even disperse drugs to different organs and body parts, scientists played copycat. A team of researchers announced this week that they have developed synthetic red blood cells that mimic our natural ones in both form and function. They describe their findings in the Proceedings of the National Academy of Sciences. To make red blood cells in the lab, study leader Samir Mitragotri and colleagues started with spheres of biodegradable polymer.

They then exposed the spheres to isopropanol, which collapsed them into the discoid shape characteristic of red blood cells. The researchers then layered proteins -- either albumin or hemoglobin -- onto the doughnut-shaped disks, cross-linked the proteins to give them extra strength and stability, and finally dissolved away the PLGA template to leave only a strong but flexible shell [The Scientist]

. Mitragotri's creations are about 7 microns across—the same diameter as real red bloods cells—and they have the same disc-like shape as their real-world counterparts. They act like real cells, too, he says.

"The soft protein shell makes them squishy and elastic," says Mitragotri. "They can squeeze through capillaries smaller than their own diameter, just like real blood cells" [New Scientist]

. And perhaps most impressively, they can carry substances like the real thing does. Mitragotri's team of researchers experimented with hemoglobin and the anti-blood clotting drug heparin; the synthetic cells could soak up either one and release it later. The lab-created cells could use that talent to aid drug dispersal, or provide other useful functions like distributing iron oxide, which ups the contrast in MRI images.

And now that they can make healthy-shaped blood cells, they also can begin experimenting with abnormal cells (like those found in people who have sickle-cell anemia or hereditary elliptocytosis) to better understand the physical properties of the diseases and work toward new therapies [Scientific American]

. The next step remains to test the synthetic cells safety and effectiveness in vivo. Related Content: 80beats: With a Blood Sample & 20 Minutes, Nanosensors Could Detect Cancer 80beats: "Spider-Pill" Will Crawl Through Your Intestines to Check for Cancer 80beats: To Mend a Broken Heart, Researchers Start in the Stomach 80beats: U.K. Aims to Create "Unlimited" Supply of Blood from Stem CellsImage: Nishit Doshi