Despite a long history of therapeutic use, the research on elderberry's benefits in fighting the flu comes up short. 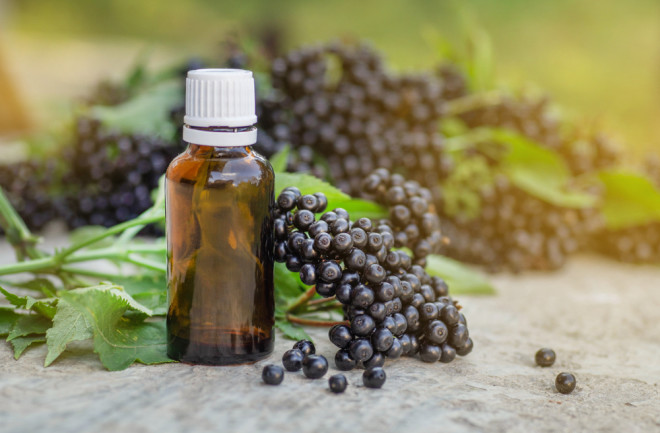 As flu season creeps up on the Northern Hemisphere, cold and flu relief medications will inevitably fly off store shelves. A natural remedy that shoppers might reach for is elderberry, a small, blackish-purple fruit that companies turn into syrups, lozenges and gummies.

Though therapeutic uses of the berry date back centuries, Michael Macknin, a pediatrician at the Cleveland Clinic, hadn’t heard of using elderberry to treat the flu until a patient’s mother asked him about it. Some industry-sponsored research claims that the herbal remedy could cut the length of the symptoms by up to four days. For a comparison, Tamiflu, an FDA-approved treatment, only reduces flu duration by about a single day. “I said, 'Gee, if that’s really true [about elderberry], it would be a huge benefit,'” Macknin says.

But the effectiveness and safety of elderberry is still fairly unclear. Unlike the over-the-counter medicines at your local pharmacy, elderberry hasn't been through rigorous FDA testing and approval.

However, Macknin and his team recently published a study in the Journal of General Internal Medicine, which found that elderberry treatments did nothing for flu patients. This prompts a need for further studies into the remedy — work that unfortunately stands a low chance of happening in the future, Macknin says.

Elderberries are full of chemicals that could be good for your health. Like similar fruits, the berries contain high levels of antioxidants, compounds that shut down reactions in our bodies that damage cells. But whether or not elderberry's properties also help immune systems fend off a virus is murky. There are only a handful of studies that have examined if elderberries reduced the severity or duration of the flu. And though some of the work prior to Macknin’s was well-designed and supported this herbal remedy as a helpful flu aid, at least some — and potentially all — of those studies were funded by elderberry treatment manufacturers.

Macknin says an elderberry supplement company provided his team with their products and a placebo version for free, but that the company wasn’t involved in the research beyond that. Macknin's study is the largest one conducted on elderberry to date, with 87 influenza patients completing the entire treatment course. Participants in the study were also welcome to take Tamiflu, for ethical reasons, as the team didn’t want to exclude anyone from taking a proven flu therapy. Additionally, each participant took home either a bottle of elderberry syrup or the placebo with instructions on when and how to take it. The research team called participants every day for a symptom check and to remind them to take their medication.

By chance, it turned out that a higher percentage of the patients given elderberry syrup had gotten their flu shot and also chose to take Tamiflu. Since the vaccination can reduce the severity of infection in recipients who still come down with the flu, the study coincidentally operated in favor of those who took the herbal remedy, Macknin says. Those patients could have dealt with a shorter, less-intense illness because of the Tamiflu and vaccination. “Everything was stacked to have it turn out better [for the elderberry group],” Macknin says, “and it turned out the same.” The researchers found no difference in illness duration or severity between the elderberry and placebo groups. While analyzing the data, the team also found that those on the herbal treatment might have actually fared worse than those on the placebo. The potential for this intervention to actually harm instead of help influenza patients explains why Macknin thinks the therapy needs further research.

But, don't expect that work to happen any time soon. Researchers are faced with a number of challenges when it comes to studying the efficacy of herbal remedies. For starters, there's little financial incentive to investigate if they actually work. Plant products are challenging to patent, making them less lucrative prospects for pharmaceutical companies or research organizations to investigate. Additionally, investigations that try and prove a proposed therapy as an effective drug — like the one Macknin and his team accomplished — are expensive, Macknin says. Those projects need FDA oversight and additional paperwork, components that drive up study costs. “It’s extraordinarily expensive and there’s no money in it for anybody,” Macknin says.

Talk To Your Doctor

Ultimately, research on elderberry therapies for flu patients is a mixed bag, and deserves more attention from scientists. However, if you still want to discuss elderberry treatments for the flu with your doctor, that’s a conversation you should feel comfortable having, says Erica McIntyre, an expert focused on health and environmental psychology in the School of Public Health at the University of Technology Sydney. Navigating what research says about a particular herbal medicine is challenging for patients and health practitioners alike. The process is made more complex by the range of similar-sounding products on the market that lack standardized ingredients, McIntyre says. But when doctors judge or shame patients for asking about non-conventional healthcare interventions, the response can distance people and push them closer to potentially unproven treatments.

Even worse, those individuals might start to keep their herbal remedies a secret. “It is that fear about being judged for use of that medication,” McIntyre says, that drives up to 50 percent of people taking herbal treatments to withhold that information from healthcare practitioners. That’s a dangerous choice, as some herbal and traditional medications can interact and cause health problems.

If a physician shames someone for asking about alternative medicines, it’s likely time to find a new doctor, McIntyre says. Look for someone who will listen to your concerns — whether it's that you feel traditional treatments haven’t worked for you, or that you didn’t like the side effects, the two common reasons people pursue herbal treatments in the first place. “You’re not necessarily looking for a doctor that will let you do whatever you want,” McIntyre says, “but that they actually consider you as a patient, your treatment choices and your treatment priorities, and communicate in a way that’s supportive.” And if a doctor suggests that you avoid a treatment you’re interested in, ask why. They generally have a good reason, McIntyre says.

For now, know that even if your doctor doesn’t support you taking elderberry, there are other proven preventative measures that are worth your while — like the flu shot. Anyone six months or older should get it, Macknin says, and stick to the protocols we’re used to following to prevent COVID-19 infections, like social distancing, mask-wearing and hand-washing. Those measures also help prevent flu transmission, too — something, so far, no elderberry supplement package can claim.