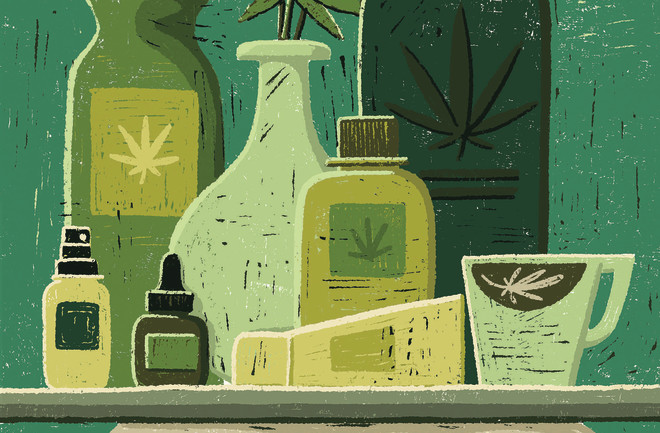 No single compound expanded its market in 2019 quite like CBD did. This cannabinoid owns the year’s bragging rights for new-product diversity, after finding its way into water, lattes, jellybeans, hummus, cosmetics and even doggie treats.

CBD, or cannabidiol, is one of dozens of biologically active ingredients called cannabinoids created by Cannabis sativa plants. CBD only recently earned the most-popular-cannabinoid title — for decades, the crown more likely belonged to THC, the euphoria-inducing compound in marijuana. But not all C. sativa plants contain much THC: Those that do are considered marijuana, while those that don’t are called hemp. Now, the Farm Bill of 2018 has made growing hemp as mainstream as farming corn and soybeans, as long as derivative products contain no more than 0.3 percent THC. The bill also spells out federal regulations on cultivating and producing hemp. And more hemp means more CBD.

Currently, the only FDA-approved CBD-based drug is Epidiolex, which treats seizures from rare types of epilepsy. A study published in May found that synthetic versions of CBD may also work on seizures, based on preliminary studies in rats. What’s more, researchers announced in June that CBD might even work as an antibiotic.

But these results are still preliminary. The FDA has not approved any uses of CBD in food, beverages or dietary supplements — meaning it’s currently illegal for any companies to claim CBD has medical or therapeutic benefits. Outside of these uses, CBD is not federally regulated, so products available to the public can be all over the place in their claims. In September, the Federal Trade Commission sent letters to three companies selling CBD-infused products including oils, capsules and gummies, warning them it was illegal to make health claims without “competent and reliable” evidence.

Despite the lack of proof, some people are turning to CBD as a way to self-treat symptoms like anxiety and pain, sometimes as an alternative to opioids. In 2019, big-name stores like Sephora, Walgreens and CVS started selling products containing CBD, and celebrities started announcing product endorsements.

“CBD is perceived as safe and attractive and is gaining widespread use,” says Simon Haroutounian, chief of clinical pain research at the Washington University Pain Center in St. Louis. But even though the market is booming, the quality of human research is spotty, he says.

Researchers still don’t know how CBD works in terms of enzymatic pathways — that is, how the body eliminates CBD after intake. CBD is probably broken down in the liver, says Haroutounian, but until researchers know which enzymes are involved, they don’t know how CBD interacts with other drugs.

It’s also unclear how much CBD reaches the blood after it’s inhaled or taken orally, and whether enough reaches target tissues. And researchers still don’t have reliable data on how often to administer CBD, or in what doses.

“We are not in a very good position to make claims,” Haroutounian says. “We don’t even know what to tell people about driving impairment, whether they should avoid driving after ingesting a particular amount of CBD.”

Although some data support claims that CBD doesn’t produce the euphoria associated with THC, it’s still psychoactive, says forensic toxicologist Michelle Peace. “By some accounts, CBD relieves anxiety and PTSD symptoms, which means that it has a psychoactive effect,” she says.

If CBD relaxes users, or makes them drowsy, she adds, such effects can impair driving, similar to a sleeping medication that would impair the ability to operate a vehicle.

As of Oct. 15, the Centers for Disease Control and Prevention had reported over 1,500 cases — 33 of them deaths — across 49 states and the U.S. Virgin Islands of a lung illness associated with vaping. As of this writing, the cause of the illnesses is still unknown, but could be linked to the nicotine, THC, CBD or any of the other additives found in e-cigarette products.

It’s not the first time people have fallen sick after vaping. The CDC tracked an outbreak of poisonings in Utah in 2017 and 2018 from a fake CBD product that sent people to the ER with symptoms including confusion, hallucinations and seizures. Most of those poisoned had vaped the product.

Peace had already been testing vaping products when someone contacted her after having a bad experience vaping CBD oil. He ended up with a high he hadn’t wanted or anticipated. In work published in January in Forensic Science International, Peace and her team tested the CBD oil he had vaped, plus other products from the same company: They found the synthetic cannabinoid 5F-ADB and dextromethorphan, the active ingredient in cough syrup, either of which could be causing some of the reported side effects. In the same journal in April, a European team reported a case study of an 18-year-old man whose death was related to smoking synthetic cannabinoids, including 5F-ADB.

“I think the tangle of these two industries has created some public health, public safety concerns,” says Peace, who is also a professor at Virginia Commonwealth University.

Once her CBD vaping study came to light, people started contacting Peace to say they, too, thought they’d been poisoned by a CBD product. Peace and her team have been testing those products and calls some of the stories “pretty terrifying.”

But answers and data are on the way. Peace and her team are preparing results of their 2019 follow-up studies for publication. In May, the FDA held a public hearing on the safety and efficacy of CBD products. In June, a bipartisan team of legislators introduced a bill aimed to streamline research, and in September, the National Institutes of Health announced $3 million in new research awards to investigate the use of cannabinoids and other cannabis-based, non-THC compounds for pain management. More than a hundred clinical trials are currently underway.

“There are so many questions,” Haroutounian says. “We need to step back and do diligent work from square one.”

[This story originally appeared in print as "The CBD Cure-All?"]