International Variations of Yogurt: A Cultural Exploration of Milk

Photo credit: Robert Koehler It’s a dessert, it’s a condiment, it’s a breakfast staple. Yogurt can be consumed in a myriad of ways; there also exist several variations of yogurt around the world that differ dramatically in taste and texture. It all begins with milk—be it from a cow, sheep, buffalo, donkey, or goat. In standard western forms of yogurt, the art of yogurt-making begins by heating milk to 85°C and holding for 30 minutes or at 90°C for 10 minutes. Applying heat denatures the whey protein, lactoglobulin, and plays a pivotal role in determining the yogurt’s final creamy texture. Without this protein denaturation, the milk proteins won’t set together in an organized matrix, but will instead cluster together and form curds. In the second phase, fermentation, milk is first cooled to a temperature within the range of 30°C-45°C, a range well tolerated by the microbes that play a role in fermentation. Traditional yogurt-making in the western world relies on bacterial cultures containing Lactobacillus bulgaricus and Streptococcus ther­mophilus, which can be directly added to milk in the form of a packaged starter (similar to yeast) or taken from a previously-made batch of yogurt. The bacteria then convert the milk sugar, lactose, into lactic acid, which firms the yogurt and provides it with its tart and tangy taste. Fermentation conditions heavily influence the flavor and consistency of the final product. Different types of bacteria thrive in different temperature ranges and can produce several variations in consistencies, ranging from smooth and creamy to thick and jelly-like. At lower temperatures, bacteria produce lactic acid much more slowly and it can take up to 18 hours for the yogurt to set; by contrast, lactic acid bacteria working at higher temperatures can set the milk proteins in just two or three hours. A rapid, high-temperature gelling will result in a firm yogurt, whereas a low-temperature, slow gelling will produce a more delicate, tightly packed protein network. [1] Throughout the world, we’ll find several different kinds of yogurt or yogurt-like products. Significant textural or taste changes can be made with simple tweaks in the preparation or fermentation process, and we’ll explore a few of these here. Greek yogurt Greek yogurt has become ubiquitous in grocery stores over the past decade and is loved for its rich flavor and thick consistency. The secret behind its popularity lies in the straining step. Straining allows the liquid whey component of milk to drain away and also removes some of the lactose, leaving behind a product with reduced sugar and nearly double the protein when compared to its non-strained counterparts. Although not actually of Greek origin (its origins still remain unclear), this strained yogurt is also popular throughout the Middle East and Central Asia [1,2]. Viili This slimy dairy product topped with mold may sound like a failed kitchen experiment, but is in fact a yogurt-like product held dear to many Scandinavians. Known as viili to the Finnish, långfil to the Swedes, or tättemjölk to those in Norway, this ropy milk product is so thick that it needs to be cut with a knife when served. The main culprit in viili’s ropiness is a mesophilic strain of lactic acid bacteria called Lactococcus lactis subspecies cremoris. During fermentation, this strain of lactic acid bacteria produces long strands of slimy sugars known as exopolysaccharides that create the characteristic texture and flavor profile of viili. On its surface, you’ll find a velvety layer of mold formed from G. candidum, which lends this dairy product fruity and savory notes. The mold also consumes lactic acid, reducing the acidity of viili, giving it a relatively mild acidic flavor. To make viili, you’ll need milk and a viili starter, which contains both Lactococcuscremorisx and G. candidum [3]. Kefir Although not technically yogurt, kefir is a bubbly, mildly alcoholic, Russian-derived equivalent. What distinguishes kefir from yogurt is that instead of relying solely on lactic acid bacteria for fermentation, it’s made from kefir grains, which are large cauliflower-like complexes composed of lactobacilli bacteria and yeasts. Kefir also sets itself apart from other fermented milk products in that its fermenting microbes exist in these relatively large, popcorn-sized ‘grains,’ instead of being evenly dispersed throughout the milk. While bacteria are busy converting a portion of the lactose into lactic acid, yeasts from the kefir grains also convert lactose into ethanol and carbon dioxide. The result is a tangy, yeasty, and effervescent beverage [4]. Kefir boasts higher probiotic activity than typical yogurts, making it a fermented dairy product of choice among health enthusiasts. 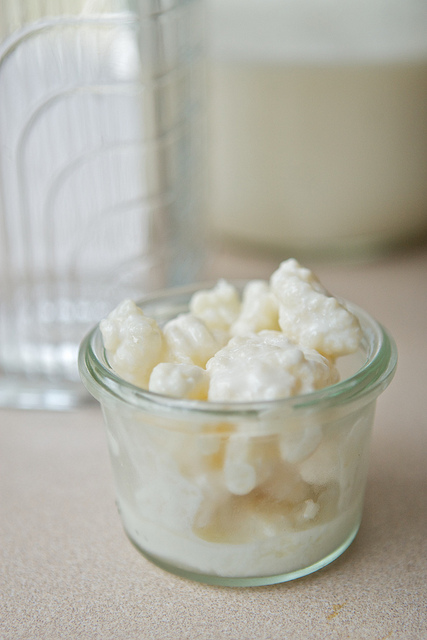 Kefir grains. Photo credit: Chiot's Run (chiotsrun/Flickr) Ayran This national drink of Turkey is made by diluting natural yogurt with ice water and salt. Throughout Turkey, different regional variations of ayran exist, with the most well-known version originating from a town called Susurluk. In Susurluk, local variations of ayran are made from a mixture of cow, buffalo, and sheep’s milk, giving it a distinctive creamy and foamy quality. A notable feature of Ayran is its lower shelf-life when compared to other fermented milk products. Stabilizers are added to ayran to prevent the water and milk mixture from separating, but salt hinders the effects of stabilization [5]. Yakult

Photo credit: Dezzawong/Wikimedia Commons Now found all over the world and most notably in vending machines throughout Asia, Yakult is a probiotic drink that was developed in Japan. Japanese microbiologist, Minoru Shirota, was searching for a strain of bacteria that would benefit digestive and overall health. His work led him to Lactobacillus casei Shirota, which he cultivated and used to develop Yakult. Yakult is made from adding this unique bacteria strain to skim milk, water, and sugar, and is often enjoyed for its sweet and fruity natural flavors. As seen above, Yakult can also be found in several flavor variations as well. Cultured milks are a culinary marvel, especially when you consider how many different forms it can take. Head to the dairy aisle and try a new variation of yogurt, or why not attempt making some at home in your own kitchen? With all the different forms out there, you’ll surely find one you enjoy. References cited:

Mai Nguyen is an aspiring food scientist who received her B.S. in biochemistry from the University of Virginia. She hopes to soon escape the bench in pursuit of a more creative and fulfilling career. Read more by Mai Nguyen