If Drug-Slathered, Erection-Enhancing Condoms Won't Lead Men to Safe Sex, Nothing Will 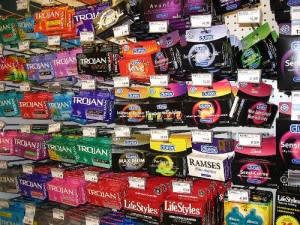 For men who find that condoms sometimes, um, lessen their enthusiasm, some good news: Durex may soon be selling erection-enhacing condoms with a pharmaceutical boost. The condoms, developed by UK biotech company Futura Medical, are lined with a gel that increases blood flow. The gel's active ingredient, glyceryl nitrate, has been used for as a vasodilator for over a century. The tricky part was getting the gel to stay in the condom without degrading the latex, but the company found a way (and quickly patented it). Men who enrolled in the clinical trial took the condoms home and gave them a test run (the things we do for science!). Both they and their partners reported longer, larger, and harder erections, presumably while grinning. The condoms are now being reviewed by European regulators, and if approved, they could be on shelves there later this year. The product is meant specifically for men who have trouble maintaining an erection while wearing a condom, but there's no prescription required, so anyone will be able to pick up a box from the nearest drug store. No such luck for American consumers, who will be stuck getting lucky the old fashioned way; the FDA will want more clinical trials before it makes a decision. Officially called CSD500, the product has been informally dubbed the "Viagra condom." But before they start selling the condoms, Durex will doubtless come up with a more appealing, less trademark-infringing name. Maybe they'll even roll out an innuendo-filled ad campaign---background music for the TV spot, anyone?