We shouldn’t look at evolution as a thing of the past — it’s happening right before our eyes. 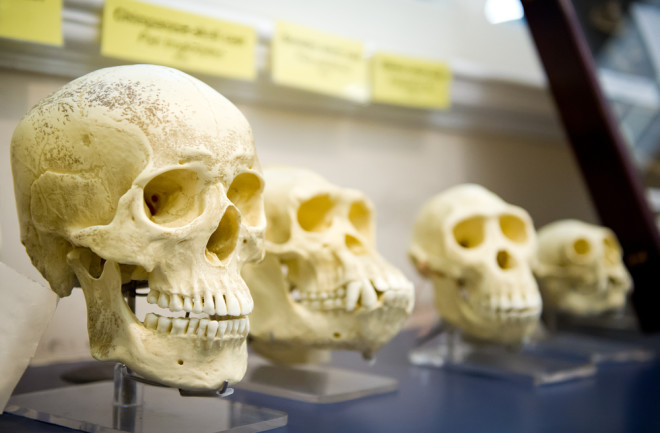 Touch your thumb to your pinky. Can you see a long, thin muscle pop out on the inside of your wrist? If not, congratulations — you’re a mutant. You’re missing a muscle that makes it easier to swing from tree branches. Our orangutan cousins still have it, but since we generally don’t need to swing through the jungle like Tarzan, humans are evolving without it.

The absence of this muscle in about 15 percent of humans is an example of how evolution is an ongoing process. And as humans change on genetic and physiological levels, researchers are already documenting subtle changes in the makeup of our bodies.

Sometimes, we think of evolution as a transformative process that allows new traits to arise that make organisms better able to survive and pass on their genes — changes that make them stronger, faster, better. But many of the evolutionary changes that humans are undergoing are subtle and have more to do with traits fading away that are no longer helpful, and the quiet, curious persistence of ones that can cause harm.

In the case of the missing forearm muscle, researchers think we’re losing it because it’s just not worth the developmental energy to produce it. It’s like how, if you live in the Great Plains, it probably doesn’t make sense to spend extra money on a car equipped with fancy features for driving in the mountains. If we’re not going to be swinging through trees, growing a special tree-swinging muscle is a waste from an evolutionary standpoint. So, we’re evolving without it. Same goes for wisdom teeth and jaw structures to accommodate big muscles for chewing tough foods.

“We call it relaxed natural selection,” says Maciej Henneberg, a professor of anthropological and comparative anatomy at Australia’s Adelaide University. Henneberg and his colleagues recently reported that more and more people are being born with an extra artery in their forearms, one that usually disappears in utero. This artery shares real estate with a nerve passing through a structure called the carpal tunnel; people with this extra artery are more prone to painful carpal tunnel syndrome.

“In the evolutionary past, even a hundred years ago, it was a disadvantage to have a median artery because if people worked hard with their hands, [it could] cause carpal tunnel syndrome,” explains Henneberg. But with the advent of carpal tunnel surgery, the median artery is no longer the liability it once was — meaning that a condition that used to make it hard to work in the fields and thrive is suddenly not a big deal. About 10 percent of people born in the mid-1880s retained a median artery, but in Australians born in the late 20th century, 30 percent of people have it. Henneberg says it could be an example of rapid microevolutionary change.

The Role of Medicine

This altered balance is visible in the medical conditions that humans are passing on with more frequency. “Type one diabetes, which is mostly inherited, is increasing in the present-day world, and incidence of type one diabetes is greater in those countries that have lower selection opportunities,” says Henneberg. In other words, people in countries that have better diabetes treatments tend to get it more. Whatever doesn’t kill you, it seems, can linger in the gene pool.

It’s worth noting that not all the changes humans are undergoing are the result of evolution. Some are physiological responses to food and lifestyle, but they’re not passed down through genes. We see them generation after generation because those lifestyle conditions remain the same. For instance, we humans are, on average, taller and heavier than we were a hundred years ago because we have easier access to nutritious food and don’t burn as many calories scrambling for survival, not because a “big” gene got switched on.

“We get fewer infections in childhood, and we don’t have the same revving up of our immune systems, so a lot more of our calories are going into height and weight than might normally go into things like fighting infections,” says Julie Parsonnet, an infectious disease expert at Stanford University. Parsonnet helped document the way that Americans’ body temperatures are lower now than they were 150 years ago — another example of non-evolutionary, physiological change.

“The Industrial Revolution and the advent of modern medicine were a huge benefit for humans, and we no longer really have to struggle to be healthy,” says Parsonnet. Fighting infections and maintaining a stable body temperature both burn a lot of calories. For those of us with access to vaccines, antibiotics and homes kept at a comfortable 70 degrees Fahrenheit year ’round, our bodies don’t have to work as hard — meaning our temperatures run a little cooler than the historical 98.6 degrees.

But regardless of the cause, the reality is that humans are changing. “We are not the same people that we were a hundred years ago,” says Parsonnet.

And the main challenge for the future won’t be for humans to fight diseases with brute force. In the past, now-treatable conditions killed many people, often times those with underlying conditions or vulnerabilities. “It made people die young, or it made people lose children, or it made people be crippled,” says Henneberg. Our new challenge as a species, he says, is social cooperation — collectively using money and resources to protect as many lives as possible, and enabling more people to benefit from medical advances.