There are biological reasons we hug it out. 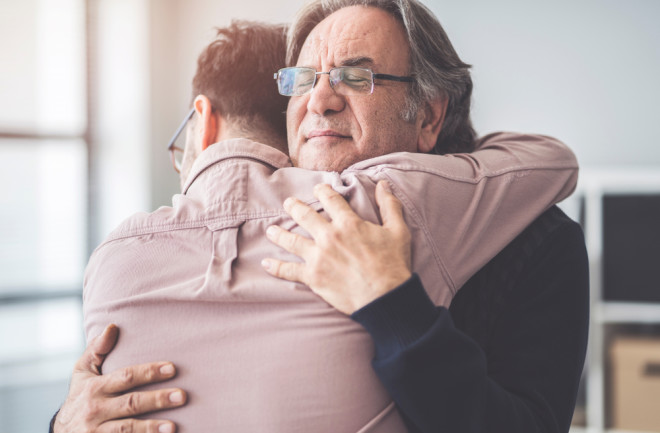 To hug or not to hug, that’s the question right now. We’re in a precarious place in the world of greetings etiquette. Depending on where you live, many of us are vaccinated. But it’s hard to know for sure before you embrace whether or not the person you’re leaning into has gotten the jab. At the same time, many of us are yearning for the warmth of a hug after a long year of social isolation. Humans, according to experts, biologically need touch and a good long hug is one of the best ways to get it.

Suzanne Degges-White is a professor and researcher focused on social relationships at Northern Illinois University in Dekalb, IL. She says that our need for a hug goes all the way back to the survival of our species. When we’re born we can’t care for ourselves and we need to be comfortable being held in order to survive. We’re rewarded with a rush of feel good hormones that come from a cozy embrace.

“When we hug our brains release oxytocin, the bonding hormone, as well as serotonin and endorphins,” says Degges-White.

This bond and sense of community has an important evolutionary role because for humans, the security of our small groups and later communities was really important to survival. Close contact helped build civilization. As a result, our brains need each other and when we miss out it has psychological repercussions.

“When we can’t hug we don’t get that jolt of good hormones,” says Degges-White.

The need is so deeply engrained in us that over the past year due to COVID-19 many people have been experiencing depression and anxiety due to what Degges-White calls “touch deprivation.” At first it was most rampant in already isolated nursing homes where the virus initially did the most damage and over time, like the pandemic itself, that need for connection spread to the wider community.

We may not know what we’re getting from greeting our friends and family with a hug. We just enjoy it. It isn’t until those experiences are taken away that we feel pain and sadness. An elbow bump or air greeting does not suffice. Research published in the journal Psychological Science has shown that hugging has a “stress buffering” effect that may even protect us from chronic illness and infections.

“We don’t miss it until it’s gone,” says Degges-White. “Until you get a headache you don’t how good it feels not to have one.”

Some of us grew up in more formal households where hugging wasn’t common. Others may have experienced abuse that makes hugging traumatic. But in both cases when children don’t experience healthy touch, it can impact their development. Kids that didn’t grow up being held, says Degges-White, miss out on that sense of safety and protection. They may act out or isolate from those around them. In some cases, the opposite may also be true. Some children may show too much affection, craving any form of positive attention that they didn’t get at home.

What About Cultures Where Hugging Isn’t Common?

While hugging might not be the norm, connection is still key. In some communities, a parent wears the baby until they’re mobile so they’re constantly being held. Cultures that don’t hug might kiss as a greeting instead. And in other cultures where hugging and embracing are not social norms, other forms of intimacy are more prevalent. When people are more restrained in terms of greetings, they may be more sexually expressive. While in the United States we may hug as a greeting, we have a culture of shame around sexual expression and around the body, but other countries don’t have that, says Degges-White.

“In the end, every culture figures out their way of getting connection,” she says.

Is Hugging Safe Once You’re Vaccinated?

Still, for more than a year, we’ve been missing out and many of us are in a gray area when it comes to whether or not to reach in for that much-coveted warm embrace. But according to Rajeev Fernando, director of the Division of Infectious Diseases at Stony Brook Southampton Hospital in Southampton, New York, if you’re both vaccinated then go for it because research has shown that the risk of transmission is extremely low. And if you’re vaccinated but you don’t know for sure whether the person you’re hugging has been vaccinated, it’s still most likely safe.

“The virus can in theory colonize the nose without causing clinical disease but the risk is low and the chance of a vaccinated person getting serious clinical disease and hospitalized is exceedingly low,” says Fernando.

When it comes to hugging younger children who haven’t been vaccinated, there’s a little bit more risk, but it’s still minimal when parents are vaccinated. Children don’t manifest COVID-19 in the same way as adults because the coronavirus binds to ACE2 receptors which are abundant in adults but not in young children. Even if kids aren’t yet vaccinated, if adults are, the risk of transmission is still really low.

But if you’re an adult that’s not vaccinated, then hugging is still off limits, especially embracing others who are also unvaccinated because the virus can easily be transmitted. This is particularly true in parts of the country where there’s a higher percentage of people who are not vaccinated because the virus is still floating around their communities. Viruses, Fernando says, unlike bacteria, can’t live on surfaces for any period of time. They need a cell to survive. That’s why transmission is airborne. Wearing a mask is safer than not if you haven’t been vaccinated, but there’s still a risk when you’re getting that close.

Unfortunately, says Fernando, “there are no slam dunks if you’re not vaccinated.” If we want things back to a place where we can safety reach in for that long awaited embrace, everyone who can be needs to get vaccinated.

More From Discover
Mind
Why Alone Time Carries a Stigma (Even If It Feels Great)
Technology
Can Virtual Reality Teach Empathy?
Mind
What Makes Us Introverts, Extroverts or Ambiverts?
Mind
The Psychology of Why Consumer Rewards Programs Suck You In
Mind
Awkward Silences: Maybe It's Time to Stop Avoiding Them and Start Embracing Them
Mind
Why People Become Overwhelmed by Conspiracy Theories — and How To Help Them
Recommendations From Our Store
My Science ShopCosmos: Possible Worlds
My Science ShopStrange Science
My Science ShopEinstein's Universe
My Science ShopElements Flashcards
Shop Now
Stay Curious
Join
Our List