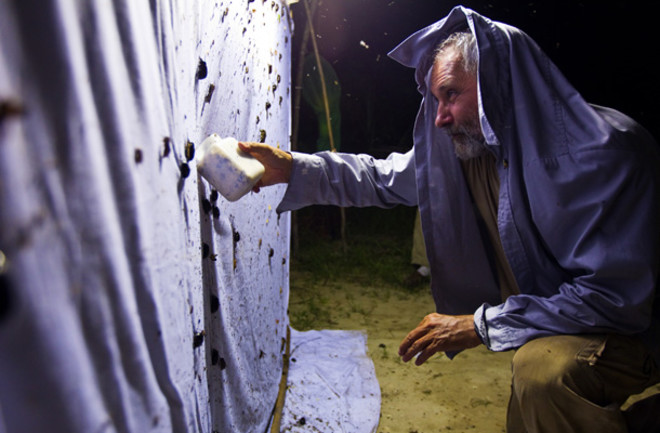 Photographer Kris Pannecoucke was part of a six-week scientific expedition along the Congo River, the first of its size since the 1960's. Panneoucke: "Yangambi---situated along the river and once the largest research center for tropical agriculture in the world---is in a ruined condition. Boats travel the river with 50-year-old maps made during Belgian colonial times." Pannecoucke took this photograph of entomologist Patrick Grootaert along the Itimbiri river, a tributary of the Congo River: "Every night entomologist Patrick hung out a white sheet and lamp to attract insects. He had to protect his ears because on earlier occasions he had some bugs stuck in his ear. He always invited us to his 'cinema.' And with a big bottle of beer we all waited for the insects to come." Grootaert collected some 5,000 specimens, including a fly that may represent a previously unknown genus. In January 2011, the scientists will hold a press conference to announce the results together with an exhibition of images in three locations: the Royal Museum for Central Africa in Tervuren, the Royal Belgian Institute of Natural Sciences in Brussels, and the National Botanical gardens of Belgium. Kris Pannecoucke/Aurora Photos