How the 'First 1,000 Days' Could Shape Your Baby's Future

Research shows that healthy nutrition in a baby and its mother form an important foundation in a child's earliest days, even impacting obesity, IQ and other variables. 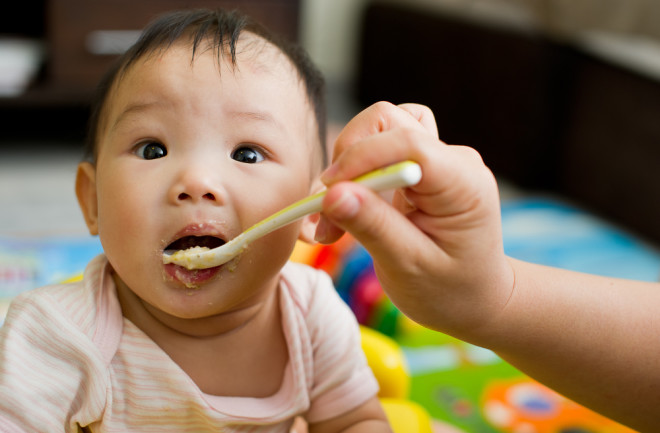 The old expression “you are what you eat” should be “you are what your mother eats.” That’s because the diet of a pregnant and nursing mom impacts a baby’s cognitive, physical, social and emotional health, as well as the tastebuds that will set up the child’s lifelong food preferences, says Rafael Pérez-Escamilla, a maternal-child health researcher at the Yale School of Public Health. Once babies start eating solid food at six months, their diet in the first two years lays the foundation for their tastebuds, cognitive and physical development and long-term risk for chronic diseases, he says.

The lifelong impact that maternal and child nutrition has on developing brains and bodies —  coined the “first 1,000 days,” from conception to age 2 — has been well established for more than a decade after the Lancet published a worldwide study in 2008. Poor nutrition in the first 1,000 days can contribute to irreversible damage to babies' growing brains and set the stage for later obesity, type 2 diabetes, hypertension and other chronic health problems, according to the Lancet study.

Advances in brain-imaging techniques have demonstrated that there are consequences for children who lack healthy food and a healthy home environment. “Regions of the brain that regulate social and emotional development get negatively affected,” Pérez-Escamilla says. “And that affects them throughout their lives.”

It could also affect obesity, which is a significant concern in the U.S., where rates have skyrocketed among children and adults in recent decades. In the U.S., more than 19 percent of children and adolescents are obese, according to the U.S. Centers for Disease Control and Prevention (CDC). That’s nearly four times the rate 41 years ago, when only 5 percent of children and adolescents were obese. Meanwhile, the prevalence of obesity among adults has nearly tripled, from 15 percent in the late 1970s to more than 42 percent in 2018, according to the latest CDC statistics available.

“A good portion of women in the U.S. are overweight when they become pregnant,” says Blythe Thomas, initiative director of 1,000 Days, a worldwide nonprofit. Overweight and obesity is considered a form of malnutrition, according to the World Health Organization (WHO), resulting from an excess of energy-dense foods and beverages (high in sugars and fats). “The biggest issue,” Thomas says, “is a lack of access to healthy food and the affordability of healthy food.”

Following doctors’ advice on weight gain during pregnancy and eating a well-balanced diet that is rich in nutrients helps ensure a baby is born at a healthy weight. This reduces birth complications and subsequent health problems for the baby, Thomas says.

A child’s lifelong health, including their predisposition to conditions such as obesity, diabetes and heart disease, can be shaped by the quality of their pregnant mother’s nutrition, Pérez-Escamilla says. Mothers who want their children to enjoy diverse tastes can lay the groundwork by consuming a variety of foods and flavors while pregnant, he says. Babies’ sense of smell and taste begin developing in the first trimester because the flavors get passed through the amniotic fluid, he says. “We’re wired to love sweet food. We’re not wired to want to taste bitter food,” he says. “The food industry knows that so well.”

“Breast milk is the perfect superfood,” Thomas says. And the longer a baby is breastfed, the greater the benefits. Breastfed babies have lower rates of obesity, she adds.

Breastfed babies, regardless of their mother’s IQ and socioeconomic status, score higher on IQ tests, according to an analysis of multiple studies published in the American Journal of Clinical Nutrition. Babies born at a normal birthweight scored 3 points higher, and low-birthweight babies scored 5 points higher on IQ tests, the study found. In a study of preterm babies, those given mother’s milk within the first 28 days of life had higher IQs, working memories and motor function and performed better on reading and math tests at age 7.

Mothers who want to lower the risk of raising picky eaters can eat a wide variety of foods while breastfeeding. While formula always tastes the same, breast milk picks up the flavors from a mother’s diet, Pérez-Escamilla says. Breastfed babies will accept a new vegetable with fewer tries than a baby fed formula, he says.

To grow their brains and bodies, toddlers need a variety of fruits, vegetables, whole grains, protein-rich foods, unsweetened milk and other dairy products, reports 1,000 Days. To reduce the chance of childhood obesity, the U.S. Departments of Agriculture and Health and Human Services’ Dietary Guidelines for Americans recommends avoiding fruit juice or food with added sugar before 12 months and eating whole fruit rather than drinking fruit juice after 1 year of age. But without a million-dollar advertising budget, the message isn’t reaching pediatricians and parents.

Pérez-Escamilla says that food industry lobbyists play a role in what messages are received. For example, while he served twice on the Dietary Guidelines committee, he says that food industry lobbying resulted in prohibitions on calling ultra-processed foods “junk foods” in the guidelines. Meanwhile, food brands that sell formula, baby food, “toddler drinks,” and toddler snacks spent $77 million in 2015 on advertising, according to a report from UConn Rudd Center for Food Policy and Obesity.

“The most unfortunate part, regardless of education, is parents are so vulnerable,” says Frances Fleming-Milici, director of marketing initiatives at the Rudd Center. Most of the companies selling toddler drinks, which have added sugars, also make infant formula, she says. Brands build trust with parents, who may fall for claims that the unregulated toddler drink supports brain development and the immune system.

“The real issue is that it goes completely against expert recommendations to transfer from breast milk or formula [at 1 year] to whole milk, water and table food,” Fleming-Milici says. One company poses a problem for which its product has a solution by essentially saying: The transition from formula or breast milk to cow's milk can lead to a drop in brain-nourishing DHA consumption. That's why it's important to help promote your little one's brain development with our product.

Parents typically just want to do the best for their child, Fleming-Milici says. But they’re tired, overwhelmed and unsure of themselves. That’s why parents can’t do this alone, according to public health experts.

The U.S. is the only one among 41 developed countries without paid family leave for new parents, and 25 percent of mothers return to work within two weeks of giving birth, reports the U.S. Department of Labor.

During the pandemic, white-collar mothers who worked from home were able to breastfeed at higher rates and for longer durations, says Thomas. Meanwhile, large portions of low-wage workers deemed “essential workers” continued to work throughout the pandemic. Women in this latter group are less likely to have a sanitary, private space and the time to pump their milk while at work, an essential accommodation for breastfeeding mothers.

“If we really want to change the trajectory of health inequities and social justice issues,” Pérez-Escamilla says, “we need to start investing more in the first 1,000 days of life.”