How The COVID-19 Pandemic Will Change the Way We Live

Large-scale social and behavioral changes — only some of which we can begin to predict — will follow the global catastrophe. 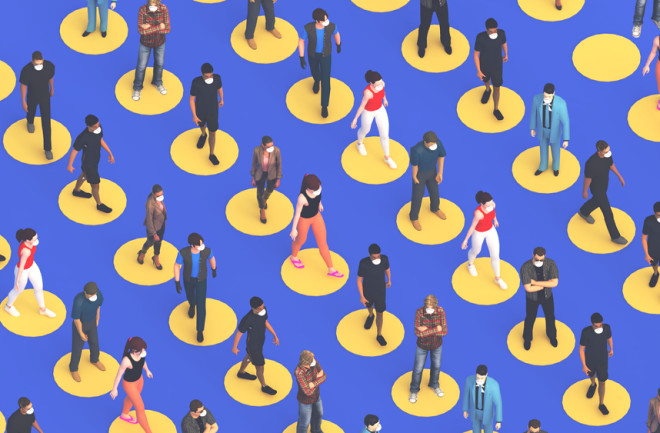 The tsunami-like impact of a global pandemic has a way of drowning out foresight. Right now, it feels impossible to predict what the world will look like next week, let alone next year. Yet behavioral science and the broad sweep of history suggest that COVID-19 will transform our daily lives in the long run.

The changes in progress — some predictable, others still hard to fathom — started brewing as soon as case counts began to escalate. An ongoing University of Southern California study published its first round of results in March, reporting that the coronavirus had already created significant shifts in people’s behavior. Among the top findings: 85 percent of people reported washing their hands or using sanitizer more often than before, and 61 percent reported following social distancing guidelines. Twenty-two percent reported stockpiling essentials like food or water.

Behavioral changes like these may be fear-driven to some extent, says Yale School of Medicine health psychologist Valeria Martinez-Kaigi, who is not affiliated with the study. Large numbers of respondents reported bracing for the possibility that they would lose their jobs or contract the virus. However, “fear-based behavior modification is not proven to be sustainable,” Martinez-Kaigi says. After the initial coronavirus threat has passed, she predicts, new habits like hand washing, isolating and hoarding will scale back considerably.

But that doesn’t mean they’ll disappear altogether. Survivors of collectively traumatic events tend to be especially vigilant in situations that burned them in the past. When people are forced to react to a deadly virus running rampant, they may be especially keen to keep future viruses at bay.

Lessons From the Past

The 1918 influenza pandemic, which killed about 675,000 people in the U.S., bent the arc of hygiene in lasting ways. In the following years, signs bearing the message “Spitting is Unlawful” sprouted up in places like train stations. Covering your cough grew to be considered common courtesy — before the pandemic, this etiquette was almost unheard of.

In the wake of COVID-19, certain habits we’ve adapted will likely stick around as well, says Kate White, a behavioral scientist at the University of British Columbia. “Our vigilance around things like disinfecting surfaces — that’s probably going to continue,” she says.

Our new ways of interacting with each other — “live long and prosper” salutes instead of handshakes, video chats instead of conference-room huddles — are also likely to stick to some degree. The old social norm is, “you meet someone, you automatically shake hands. Those social exchanges are going to evolve,” White says. “When you’re having meetings for work, people are going to start asking, ‘Do we have to meet in person?’ which is not something we would say before.”

But what lingers most after a pandemic, or any large-scale catastrophe, is a pervasive sense that the world is fundamentally unpredictable — that life feels more fragile than it once did. The prospect theory of behavior, popular among behavioral scientists and economists, states that we often give more weight to potential losses than gains in making a decision, and that we tend to overestimate the chances of an unlikely event like dying of a certain disease. Following a disaster, the tendency to believe that a threat is imminent may be magnified in some people.

Those with more obsessive personalities, White says, might become hyper-avoidant in an attempt to construct a smaller, safer world for themselves. “Maybe they won’t go to certain social events. Maybe they won’t want to take the bus anymore.”

A watershed event like this might also reorient broader attitudes about how the government should address public health issues. “If there’s anything that could underscore the interdependence we all have, it’s this situation,” says Cornell University political scientist Suzanne Mettler.

It’s possible, Mettler says, that our new embrace of this interdependence could drive us to demand a more supportive social safety net. If hundreds of thousands of Americans do die of COVID-19, and if people decide better health coverage could have prevented many of these deaths, a universal health care system might seem like an urgent necessity to more residents, she notes.

Past pandemics have ushered in dramatic governmental shifts on this level. After British colonial authorities failed to protect India from the worst of the 1918 flu pandemic, the population’s fury helped fuel the Indian independence movement led by Mahatma Gandhi. It’s possible that fighting the coronavirus will inspire this kind of unity-seeking in the U.S. and elsewhere. “One would assume a pandemic would be something that could do that,” Mettler says. “This is, in many ways, like fighting a war. The enemy is the disease.”

Mettler cautions that even in the wake of a pandemic, it will be difficult to dislodge the extreme polarization and mistrust that has divided Americans for years. White, however, sees the potential for some degree of post-pandemic solidarity, even if our philosophical differences persist. “People are appreciating that if we all act at the same time, we can see big changes,” she says.