The beloved mineral adds flavor, consistency and chemistry to our food in mysterious and potent ways. And just as it's essential in the kitchen, some salt intake is also vital to human health. 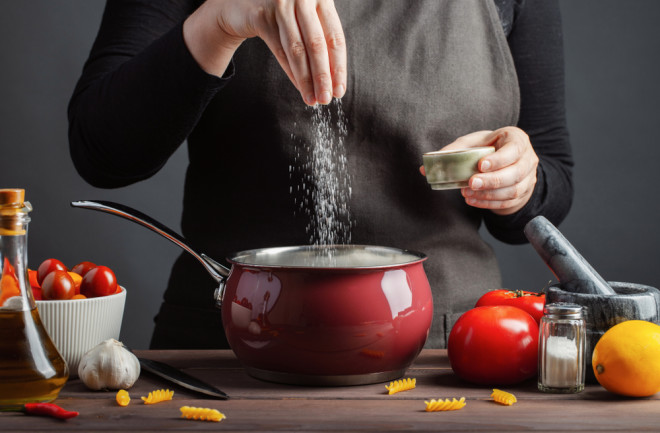 Humans go to extremes to collect salt. We dig it up from underground deposits or wait patiently for pools of seawater to evaporate and leave it behind, just so we can stir, sprinkle and scoop the mineral into our food.

Our desire likely stems somewhat from biological need. “We have this hardwired, hedonic response to these concentrations of sodium that are physiologically relevant to us from an evolutionary perspective,” says Russell Keast, a food scientist at Deakin University in Australia. Sodium, which constitutes half of each table salt molecule, keeps our nerves and muscle fibers functioning properly. Early humans came across the compound relatively rarely, which could explain why we like the taste so much, Keast says. Enjoying the biting taste would have ensured our early ancestors ate enough of the stuff when they found it.

But the salt content in most diets has crossed into new territory. Instead of consuming what we need for our bodies to function, most of us ingest too much salt because commercial food producers rely on the ingredient to make dishes appetizing and keep production running smoothly. Weaning diners off of our high-salt diets is harder than it might seem, in part because it's in our nature to crave more of the mineral, Keast says. “It’s an evolutionary relic we’re stuck with."

Besides being necessary for our bodies to operate, salt improves the way foods taste. When mixed into a dish, salt dampens the bitterness and enhances the sweetness in the other ingredients. Effectively this means salt can directly impact three of the five tastes our mouths detect: sweet, bitter, salty, sour and umami. Exactly how salt remixes the taste of a food still isn’t clear, Keast says. Presumably, the shift happens at a neurological level, after taste buds detect all the compounds in each bite and relay perception signals to our brains.

Even more impressively, salt can achieve these food alterations without revealing itself as a detectable flavor. In research where study participants sample a range of broths, for example, plain veggie water lacks appeal. When the broth is salted, recipients perceive and enjoy the changed flavor but can’t identify what it is that tastes different. Only once the amount of salt reaches what scientists call a “recognition threshold” do people taste so-called saltiness. At that point, the appeal of the broth starts to drop, Keast says. A dish at it’s Goldylocks level of salt — not too much and not too little — is when the overall taste is at its best.

The threshold at which salt levels become obvious (and unappealing) is different for each food, which explains why sodium content gets shockingly high in some products. Grain-based foods, for example, easily incorporate high salt levels without ruining food taste. And in the U.S. and U.K., breads, cereals, cookies and cakes account for about 30 to 50 percent of all the sodium a person consumes each day.

For these foods, high salt levels have less to do with flavor and more to do with product consistency, says Michael Nickerson, a food scientist at the University of Saskatchewan. Breads — which are essentially flour, water, yeast and salt — reach an even and consistent rise thanks to that last ingredient.

As yeast churns out carbon dioxide in dough, salt regulates how much of the gas each microbe produces, making sure the resulting air pockets in the final product aren’t too big. For the bread to rise in the first place, gluten proteins in the grain need to organize into a network that stretches in response to the gas the yeast creates. Here, too, salt pitches in. The mineral masks some of the positive and negative charges on each gluten protein, helping the strands aggregate and build stronger networks.

Simultaneously, the added salt helps the gluten bridges hold onto water and makes dough less sticky, saving commercial bakeries from nightmare scenarios. “This has a big implication in the big processing factories, in which they don't have to shut down the whole equipment, clean it all off, and start over again,” Nickerson says.

Home bakers generally aren’t worried about their machinery gumming up with too-wet dough. If kitchen experiments with bread suffer from insufficient salt, Nickerson says, it would likely involve collapsed portions that fell when the gluten networks were weak and the yeast went uncontrolled. In commercial bakeries, consistency from loaf to loaf (or cracker to cracker) is key, so salt volumes get cranked much higher.

How to bring those salt levels back down drives some of Keast’s and Nickerson’s work. Because as helpful or tasty as salt may be, too much sodium in the diet can raise blood pressure, which in turn raises risks of heart disease and stroke. Simply cutting the ingredient from commercially-produced foods doesn’t go unnoticed. Customers think “reduced sodium” soups, for example, taste worse, and brands don’t want one box of crackers to differ from the next.

While fixes are in the works, the science of salt (and its substitutes) has a lot of room to grow, Keast says: “While we’ve got our theories and do our research, there’s still a lot left to be known.”