How Pregnancy Tests Have Evolved Throughout History

Although pregnancy tests looked a little different than the ones people use today, women have sought these tests dating back to ancient Egypt in 1350 B.C. 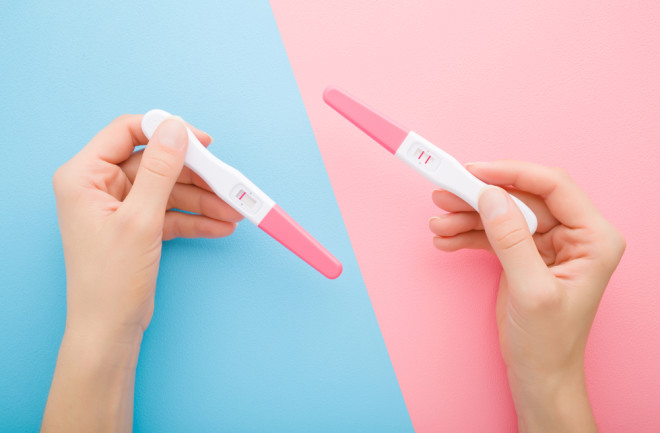 Over three thousand years ago, ancient civilizations knew that pregnancy could alter the molecular make-up of urine. Since then, scientists have scrutinized, smelled, soaked, burned and boiled urine, all in an attempt to solve the uncertainty of conception. The pregnancy test has developed over time, but they all try to solve the same question: Am I pregnant?

The first known pregnancy test dates to ancient Egypt in 1350 B.C. Papyrus scrolls, uncovered from the era, instruct potential mothers to urinate on bags of wheat and barley. If the grain germinated, the theory went, the woman was expecting. Some mothers took note of the first seeds to sprout: Barley foretold a girl and wheat a boy.

The test was based on that pregnant people possess a life-generating substance, capable of spawning both barley and babies. Although the rationale was a little off, modern scientists investigated the truth of this ancient method.

A 1963 study used this barley method to diagnose pregnancy in 70 percent of expectant mothers, although it failed to predict the child's sex. How the method works is unclear, but one explanation was the elevated estrogen levels during pregnancy could stimulate seed germination.

The practice of peeing on seeds persisted for a remarkably long time. Variations of the ancient pregnancy test appeared in the writings of the Greek Philosopher Galen (A.D. 130-200) and in German folklore, as late as 1966.

Aristotle’s teachings feature an unusual variation of the germination test, repurposed to determine infertility. According to one of his contemporaries, the Greek philosopher instructed childless couples to plant two barley seeds and water one with the man’s urine and the other with the woman’s. Whoever’s plant failed to grow was declared infertile. The test was completely ineffective and non-hygienic.

By the 10th century, uroscopy replaced the peeing on barley method. It was a questionable practice of ogling a patient’s urine. The Persian Polymath Avicenna compared the urine of newly pregnant women to chickpea water, which turned red in the later stages and a black, sooty color after childbirth. Some might question how many urine samples he saw.

Avicenna may have inspired the so-called “Piss Prophets” of 17th century Europe, who turned uroscopy into an art form. The Piss Prophets were a group of ancient physicians who would hold jars of urine to the light and scrutinize its color to diagnose all sorts of ailments, including pregnancy. Pregnant pee had a “clear pale lemon color, leaning toward off-white, having a cloud on its surface,” according to one prophet.

Later, Piss Prophets opted for a touch of alchemy and mixed urine with wine. According to one physician, “If it becomes turbid as though beans had been stewed in it, the woman is pregnant.” This technique relied on the reaction of alcohol with urinary proteins, causing the mixture to turn cloudy. However, urine from non-pregnant people would react in a similar way and was therefore useless for determining pregnancy.

At the height of uroscopy, some doctors still believed that pregnant urine possessed a life-generating substance. A 16th-century text described how the urine should be placed in a glass bottle. After three days “small animals, looking like little lice, will appear; if these are red, they say that they predict that a male has been conceived, if white, a female.”

Apart from the germination test, pregnancy tests before the 20th century were largely unreliable. If a physician correctly diagnosed conception, they were probably picking up on the visible signs and symptoms of pregnancy.

The first reliable pregnancy test was available in the 1920s, after scientists began injecting mice, then later rabbits, with urine. A hormone uniquely present in the pee of pregnant women, human chorionic gonadotropin (hCG), caused a mammal’s ovaries to swell and release an egg, just as it did in people. If the animal ovulated, the woman was pregnant.

By the 1940s, scientists had replaced rabbits with the African clawed frog. The test worked the same way as before, except that frogs laid their eggs externally. While researchers needed to kill and dissect the rabbits, they could instead just look at the ovulation in frogs. Scientists could use the frogs repeatedly, and with a higher accuracy rate than the mammals.

The development of the home pregnancy test made frogs, and even doctors, unnecessary. The test relies on hCG-specific antibodies bound to an enzyme, which triggers a color change, generating the blue line associated with a positive result. The ‘peeing-on-a-stick’ method is more technical than peeing on seeds, yet it relies on a similar concept – measuring a substance in urine – developed thousands of years ago.