Protein requirements change throughout life. But experts say it’s just as important to focus on the source of protein rather than the amount you're eating. 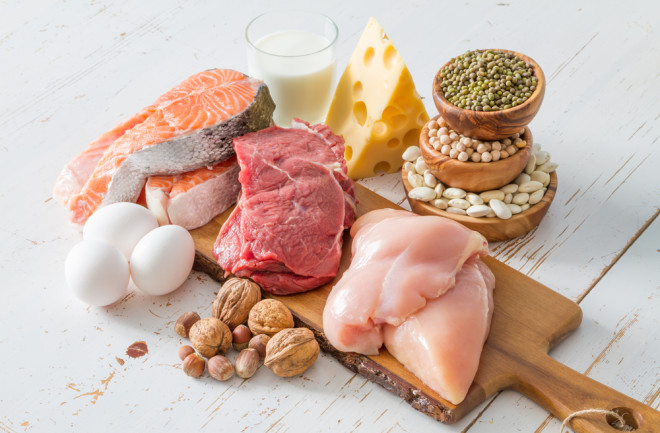 Americans love protein. It's sold in energy bars, drink powders and pancake mixes. But if each of us were to sit down with a nutritionist, they might tell us to reconsider the amount we put in our grocery carts. “I feel in my experience, an average American consumes way more protein than they need,” says Nikita Kapur, a dietician with Compass Nutrition in New York.

Instead of focusing solely on how much you scarf down, maybe consider the types of protein you lean towards or when you eat them — and what larger problems might prevent people from getting enough in the first place.

Who the Guidelines Do (And Don't) Work For

The Food and Nutrition Board, a committee of scientists that releases nutritional intake reports, recommends that individuals eat 0.8 grams of protein per kilogram of body weight each day. For example, if you weigh 150 pounds, you'd need about 54 grams. This value is supposed to reflect what 97 to 98 percent of all healthy individuals need to maintain their body weight.

However, researchers have proposed different protein requirements for specific groups of people. For example, one consortium of scientists concluded that those over 65 need slightly more protein — like 1 to 1.2 grams per kilogram — in part because an aging metabolism has a harder time converting food into new proteins for the body. And though it depends on the person, protein needs might increase for pregnant individuals, too. Some physicians recommend that expecting mothers also eat about 1.1 grams of protein per kilogram of body weight.

Other life changes might also require you to scale back the eggs and chicken, Kapur says. A lot of time spent at home during quarantine, for example, might mean you’re not as active as before.

It’s also possible you need to reduce your protein consumption no matter what. Diets that demonize fat or carbohydrates can make protein look like the most desirable meal component, and market trends reflect its heightened demand. Whey protein sports drinks, previously just for bodybuilders and other intense athletes, are booming in popularity. And in 2012, 19 percent of all food products introduced around the world claimed to be high in protein, according to Mintel. "Sports coaches, athletic trainers and fitness magazines are always promoting protein," said Angel Planells, a Seattle-based dietitian nutritionist and national media spokesperson for the Academy of Nutrition & Dietetics, in an email.

But there are risks to maxing out how much protein you eat at every meal. Many studies have connected excessive protein to Type II diabetes. For example, some research found that for every 10 grams of protein over 64 grams individuals ate, their risk of Type II diabetes rose by 20 to 40 percent. This problem might be due to where that protein came from. Some researchers pegged the increased risk to high animal protein consumption, and not so much to high plant-based protein diets.

Kapur asks about this detail when talking with clients. Is most of someone’s protein coming from sandwich meats or breakfast sausage? If so, it’s time to readjust. Even if someone switches to leaner meats, “we like to encourage plant-based sources,” she says. “You don't need to give up meat for that, but plants have other nutrients and make a more wholesome diet pattern over time.”

There’s also the question of when you’re eating your protein. People should consume the nutrient throughout the day, Kapur says, instead of, say, a single steak at dinner. That way, your body is more likely to convert all of what you eat into its useful components. This strategy might be easier to accomplish than you think. Grains, seeds and even veggies carry protein, Kapur says. Though they might not get as much attention as eggs and meat, these foods slowly add to your protein consumption throughout the day.

Not Enough Protein? There May Be Bigger Problems

On the whole, those not getting enough protein often have a low-quality diet in the first place, Kapur says. This raises another issue: Who has access to quality food to begin with? People tend to chalk up healthy eating to education alone — if you know better, you do better. “But when I see patients, I hear eye-opening stories about challenges and struggles they have,” Kapur says.

Low-income areas often have more expensive but lower-quality foods available in nearby supermarkets, and those same stores might be too far away to get to, especially if most locals don’t have cars. A study in Detroit, for example, showed that grocery stores were on average about a mile further away from majority Black impoverished neighborhoods than they were from mostly white low-income areas. In some cases, running up against barriers to a better diet can frustrate people even more, Kapur says. Knowing what works for you but not being able to make it happen can be demoralizing.

In the past five to ten years, however, Kapur has seen more insurance companies cover visits to dietitians. That's helpful for those with those plans. But overall, "access is huge part of health care," Kapur says. "I would love for everyone to have that."

Editor's Note: This article has been updated to correct an error. Adults over 65 should eat 1 to 1.2 grams of protein per kilogram of body weight; for pregnant mothers, the recommendation is 1.1 grams per kilogram.

More From Discover
Mind
5 Natural Ways You Can Improve Your Memory
Health
Why Do Some People Live So Long?
Health
This Senolytic Antibody Drug Could Combat Aging, and the Diseases It Brings
Health
5 Activities That Prevent Cognitive Decline
Mind
Why Schizophrenia is Different for Women
Health
6 Brain Boosting Foods You Should Have on Your Plate
Recommendations From Our Store
My Science ShopDiscover STEM Kits
My Science ShopDiscover 2022 Calendar
My Science ShopStrange Science
My Science ShopElements Flashcards
Shop Now
Stay Curious
Join
Our List