How many SNPs to distinguish Japanese & Chinese?

A new paper in PLoS, Rapid Assessment of Genetic Ancestry in Populations of Unknown Origin by Genome-Wide Genotyping of Pooled Samples:

Many association studies have been published looking for genetic variants contributing to a variety of human traits such as obesity, diabetes, and height. Because the frequency of genetic variants can differ across populations, it is important to have estimates of genetic ancestry in the individuals being studied. In this study, we were able to measure genetic ancestry in populations of mixed ancestry by genotyping pooled, rather than individual, DNA samples. This represents a rapid and inexpensive means for modeling genetic ancestry and thus could facilitate future association or population-genetic studies in populations of unknown ancestry for which whole-genome data do not already exist.

All fine & good. But I thought figure 4 was interesting. I've highlighted the part that I thought noteworthy: 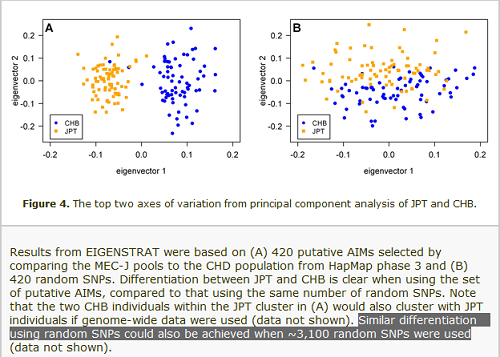 The panel on the left shows that with 420 Ancestrally Informative Markers (AIMS) you can separate the Japanese and Chinese (from Beijing) pretty well. These are markers which exhibit a lot of between population variation. But note the last section:

with 3,100 random SNPs you can generate the same separation.