Stigmas about weight and obesity can lead to patients receiving inadequate care from physicians in healthcare settings. 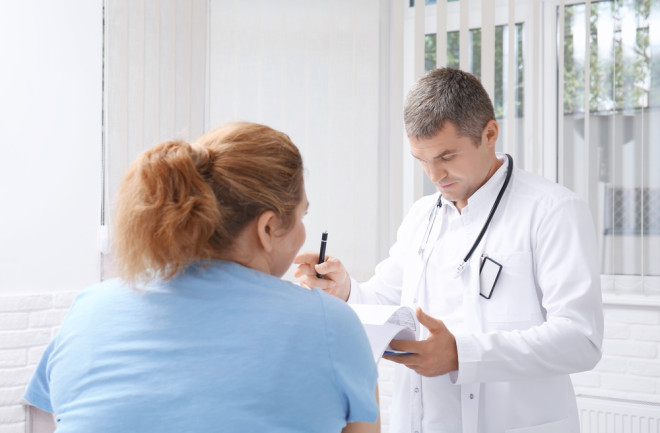 When physician Fatima Cody Stanford first moved to the Boston area, she would ride the train every morning to get to work, and every morning the same conductor would be working on her train. A few years later, that conductor stepped into her office for an appointment at Massachusetts General Hospital, where she specializes in obesity medicine. The man, in his 40s, brought his mother with him so she could help back him up if he needed to convince his doctor that he is active and healthy. When Stanford recognized him from her commute and greeted him warmly, his mother began crying, and told her that she was the first doctor he ever had who didn’t promptly assume he was living a horrible or unhealthy lifestyle.

According to Stanford, this is a common experience for her. Many of her patients, when she starts working with them, feel the need to justify themselves and their weight to her when they first begin treatment. Many have negative past experiences with physicians who make assumptions about their health and their medical history based on their weight, and as a result, they are highly wary of how they are treated in healthcare spaces.

“When patients have obesity, they come into an environment that's often not supportive of their disease process,” Stanford says. “A lot of it is that many doctors and other health care providers, really have yet to really embrace obesity for the disease that it is. And with that comes a lot of blaming and shaming, assuming that the patient is not telling the truth, assuming that the patient is not compliant with different recommendations that have been provided.”

Weight stigma, the discrimination or bias against people who are overweight or have obesity, is a serious issue that can heavily impact the mental or physical health of those who experience it. The issue manifests itself in many aspects of society, such as media, interpersonal relationships and employment. But its consequences are especially pronounced when experienced in medical settings. It can greatly impact the quality of care that people receive, even from physicians who mean well.

“It’s not like health care professionals have more obesity stigma and bias than the rest of the country. But we have the same amount,” says Melanie Jay, the co-director of NYU Langone’s Comprehensive Program on Obesity, which focuses on improving obesity treatment training for physicians. “A lot of patients with obesity avoid seeing a physician, avoid seeing a doctor and avoid health care, which leads to worse outcomes. So this is a really important problem to address.”

Sarah Nutter, an assistant professor of counseling psychology at the University of Victoria, specializes in the research of weight stigma and other weight-related issues such as eating disorders. Nutter says she was inspired to go into her field of research after facing weight stigma and weight-based bullying as a child.

Much of Nutter’s research deals with how weight stigma manifests in healthcare settings. In 2019, she worked on a study that surveyed 400 Canadian physicians on their attitudes regarding obesity. Of those physicians, 18 percent agreed with the statement “I am disgusted treating patients with obesity.” Although it was a minority of the sample, Nutter says she found the result alarming.

“What if that is representative of, you know, all physicians across Canada?” Nutter says. “How many patients are being negatively impacted by these attitudes? What does that attitude do, either unconsciously or consciously, to a patient's experience of healthcare?”

According to Nutter, studies and research have shown that higher-weight patients can experience shorter appointment times with doctors, and receive less patient-centered communication, meaning they have less opportunity to speak in their appointments. Physicians with weight stigma also commonly attribute an excessive number of health issues to a patient’s weight, in some cases failing to properly examine them.  This can lead to serious consequences, such as in 2018, when a Canadian, Ellen Maud Bennett, died of inoperable cancer, after years of seeking out medical help and constantly being told to lose weight.

Weight stigma can also impact access to procedures such as surgeries; some physicians and doctors tell patients with obesity seeking joint replacement surgeries to lose weight before they can undergo the procedure. While this ostensibly is to prevent any complications that the procedure may cause, Stanford says she frequently sees patients who were told to lose weight for a surgery without any guidelines or support to figure out how to do so. One of her patients had significant hip pain but was denied an appointment with an orthopedic surgeon until he lost weight. After she helped him lose around 90 pounds, he was finally examined and it was discovered that he had bone cancer developing in his hip.

“Everyone just assumes that when you have obesity that it must just be too heavy, and that if you just lose the weight, then the hip pain goes away,” Stanford says.

One of the most common misconceptions about people with obesity, which directly impacts how they are treated in health fields, is the belief that they are in control of their weight, and that weight in general is a completely accurate metric for health. In reality, the factors underlying a person’s weight and how it connects to their health are far more complex.

According to Jay, obesity is an extremely heritable trait, around as heritable as height and more heritable than heart disease. In addition, she says many people live in an “obesogenic environment,” where conditions promote obesity in the population. These influences can include limited access to healthy, affordable food or limited opportunity for physical activity.  Although personal choices do play some role in people’s weight, Jay says heritable factors and environmental conditions are both significantly more important.

“We don’t tend to blame people for how tall they are,” Jay says. “We don’t say ‘oh, if you had better nutrition when you were a child, you would have been taller.’ ”

Although people often link weight to overall health, Nutter says that some studies and research suggest people with higher weights aren’t necessarily more likely to die or face serious health risks than people of a lower body rate. Nutter says that how much a person is moving and exercising on a day-to-day basis, for example, can be a far more reliable metric of their health.

In spite of this, many people working in healthcare still subscribe to the belief that weight is a personal responsibility issue. In 2019, Jay and her students surveyed a group of NYU medical students who were being evaluated on their ability to care for a patient with obesity. Students tended to place controllable factors like diet and physical activity as more significant causes of obesity than genetics.

Jay attributes at least part of this stigma to a historical lack of proper obesity training. While this is improving, many physicians don’t receive significant instruction on how to address obesity with patients, which leads to them not understanding how to address it in their practices. One of the first research studies she ever participated in, a survey of several physicians, showed that many were uncomfortable discussing weight with patients, and that more negative attitudes toward obesity translated to less competency.

“We were taught to kind of deal with a lot of the downstream effects like hypertension and heart disease and diabetes,” Jay says. “But we weren't really taught how to address obesity.”

Another issue that plagues how obesity is discussed in medical fields is the Body Mass Index (BMI), the standard measurement used to classify someone as obese. According to Jay, while the BMI is useful at a population level to generally describe obesity, it doesn’t describe how much fat tissue a person actually has or say anything about their health on an individual level. Furthermore, BMI, as it’s used in the U.S., is based almost entirely on studies done by white people, which means that certain ethnicities, such as Asian populations that tend to have lower average muscle mass and bone density, would have their level of risk miscalculated.

Stanford says that BMI also significantly misrepresents Hispanic and Black populations in the country. In 2019, she published a paper redrawing the BMI based on sex and gender, to determine whether the current cut-off where a 30 BMI signals obesity is accurate. For men of all races, the cut-off shifted downward, and for Black women, it shifted upward. Because of the generalizing nature of BMI, Stanford says she doesn’t use it in her work, and instead focuses on personalizing her patients' goals based on what is healthy for them.

“I don’t give my patients a number, and they get so frustrated,” Stanford says. “They’re like ‘What weight am I supposed to be?’ And I'm like, ‘I don't know. We'll see what your body does.’ “ She adds that she’s not trying to frustrate them, but treat them as a unique individual: “They're not defined by a cookie cutter.”

In order to properly treat patients with obesity, Stanford recommends that physicians do something simple: Listen to their patients. In her own work, she always begins a relationship with a patient by having a 1-hour long appointment where they share their medical history with her. Many of her patients feel the need to preemptively justify themselves. Stanford says she focuses on hearing about their issues from them before she makes any judgements.

In addition, she says it’s important for physicians to make sure that their office and their equipment creates a space that is accessible to all patients of any weight or size. Things like chairs that people with obesity can comfortably sit in, or blood pressure cuffs that are an appropriate size, help create a welcoming environment; and plenty of medical spaces lack these inclusive features. “There are enough nonverbal cues that the patient is getting that lets them know ‘I’m not supposed to be here,’ ” Stanford says.

She also recommends that if a physician feels that they don’t have the ability to properly address the concerns of a patient with obesity, they should consider reaching out to an obesity medicine specialist. While the field is somewhat small and developing, Stanford says there are still over 4,000 board-certified physicians working in obesity medicine in the U.S. Referring a patient to one of these specialists could do more for them and their health than keeping them with a physician who lacks that specialized training.

Nutter says the best thing individual physicians can do to combat weight stigma is to seriously consider their own beliefs about weight, and how these beliefs impact the way they treat their patients. Although engaging in such critical self-reflection might be uncomfortable, Nutter emphasizes that the issue is far bigger than one individual, and even if a doctor means well, they can still have ingrained fatphobic beliefs they need to combat.

“None of us live in a vacuum,” Nutter says. “We all live in a culture that teaches us to fear fat and to think that fat is bad. That, in some way or another, is going to influence us.”