Overuse of coffee, booze and over-the-counter medications can exacerbate symptoms of anxiety, depression and other conditions. 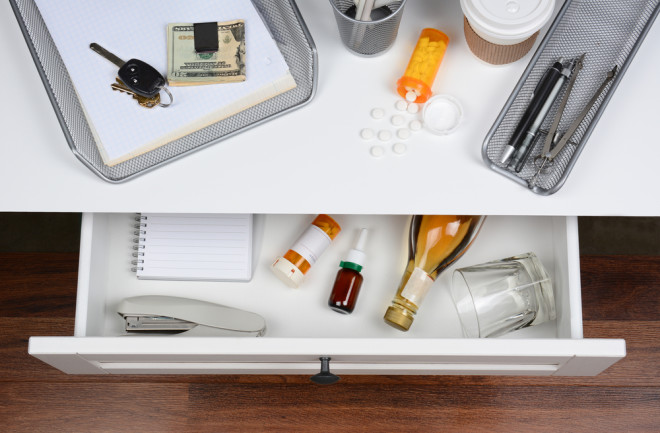 It’s no secret that living through the COVID-19 pandemic, and 2020 in general, has been emotionally exhausting. People have been isolated and social distancing, many struggling with losing a job or income. Some are treating extremely ill patients on the frontlines, dealing with the loss of friends or family members and so much more, all while trying to process an endless barrage of disasters, political turmoil and bad news unrelated to the pandemic. All this strife can be especially hard on anyone already coping with depression, anxiety and other mental health conditions.

Taking care of yourself right now may include understanding how a daily coffee or cocktail habit could be influencing your wellbeing. Everyday substances like caffeine and alcohol, when consumed in excess, can exacerbate underlying mental health issues like anxiety and depression. And seemingly harmless drugs in your medicine cabinet, like allergy or cold meds, can interact with medications used for treating mental health to bring about serious consequences.

“When we’re talking about caffeine and about alcohol and their impacts on mental health, the topic that you start focusing on is sleep,” says Alexander Blount, a psychologist and professor emeritus of family medicine at the University of Massachusetts Medical School.

Caffeine in moderation acts as a mood brightener, says Blount. There’s a difference between drinking a cup of coffee or two in the morning to get started and feel a little sharper and drinking eight cups or more over the course of the day, he says. Even if you’re able to fall asleep after drinking that much caffeine, your sleep quality is probably poor. Poor sleep quality can cause problems for people struggling with anxiety, depression, bipolar disorder and attention deficit disorder in particular, says Blouth.

Too much caffeine can also increase existing feelings of stress and anxiety. Most people are familiar with the energy boost and jitters that can accompany getting a sudden shot of espresso or an energy drink. The substance increases your body’s alertness and in doing so can make someone already struggling even more anxious.

Going heavy on the caffeine can also increase alcohol use, says Blount. Many people will have a drink or two to dull the effects of caffeine to help them go to sleep, he says. While alcohol may help you fall asleep, it often reduces the quality of your sleep, so you aren’t getting the deep rest your brain needs.

There is a reciprocal relationship between alcohol and depression, he says. Alcohol also tends to increase depressive symptoms. And symptoms of depression can make people more vulnerable to alcohol abuse. It’s a vicious cycle: feelings of low self-worth and confidence can cause someone to drink more, which then can make them feel even worse about themselves.

Already, the COVID-19 pandemic has led to a jump in the number of people reporting they feel depressed. A third of adults in the U.S. now show signs of clinical depression, according to a Census Bureau survey conducted earlier this year. People are isolated from friends and family, have lost jobs or are dealing with economic hardship and other stress that comes with weathering a global disease outbreak. Through it all, even during the most stringent lockdowns, liquor stores have remained open, which has boosted concerns from experts about alcohol dependence and relapse.

Other substances you may have lying around your house or tucked in the cabinet also need to be used carefully. The ingredients in many common decongestants, cough suppressants and antihistamines interact with antidepressants and other medications used for treating mental health in a way that can either make those drugs less effective or create new, troublesome side effects.

For example, cough medicine containing the common ingredient dextromethorphan (DXM) shouldn’t be taken in combination with antidepressants Prozac, Zoloft or Lexapro. Doing so can cause your body to produce too much serotonin, leading to a condition called serotonin syndrome that can bring about increased anxiety, headaches, fevers and a host of other symptoms. In severe cases, it can be deadly.

If you take medication for depression, bipolar disorder or another mental health condition, you should talk to your doctor before selecting an over the counter drug to alleviate a cough or runny nose. Don’t stop taking your medication, however.

If you want to start drinking less coffee or adult beverages, Blount recommends using breathing and mindfulness exercises to help reduce anxiety and connecting with friends and family over the phone or video chat to alleviate feelings of isolation. Changing your routine so that you replace that fifth cup of coffee or first beer with something else you enjoy, like going for a short walk, can help disrupt the pattern.