Health officials can’t fight the coronavirus pandemic without knowing where infections are. COVID Near You aims to reveal hotspots as sick people self-report symptoms. 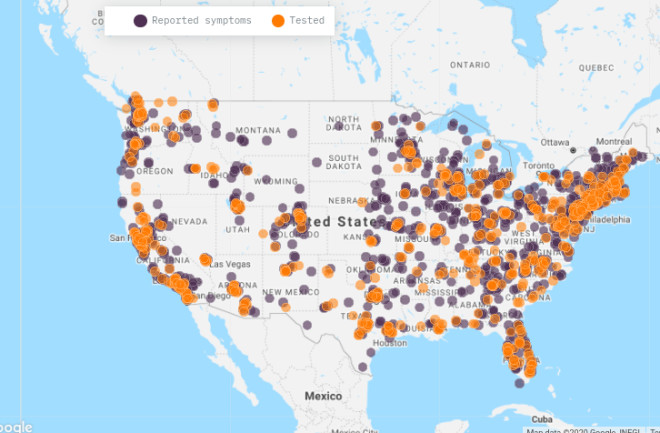 In just the first week, thousands of people reported their symptoms and coronavirus test results to COVID Near You. The researchers behind the effort work with national, regional and local health officials to help guide response plans. (Credit: COVID Near You)

Across America, people are suffering from symptoms similar to COVID-19, yet they can’t get an official diagnosis because of the lingering shortage of test kits. The experience is frustrating for patients. It’s also dangerous for public health officials.

“You cannot fight a fire blindfolded,” World Health Organization chief Tedros Adhanom Ghebreyesus said at a press briefing earlier this month that encouraged countries to step up testing. “We cannot stop this pandemic if we don’t know who is infected.”

Now, researchers have created a way to track people with COVID-19 symptoms, even if they still can’t easily diagnose who actually has the disease. The effort is called COVID Near You. Anyone in the U.S. can use the site to self-report their location and how they’re feeling.

“There’s so much fear from everyone,” says COVID Near You’s Kara Sewalk, a program manager in the computational epidemiology lab at Boston Children’s Hospital. “This gives everyone a little action they can do to contribute. And then it gives them an insight into what's happening in their area.”

Take Part: Share Your Symptoms With COVID Near You

How Are You Feeling?

The site taps into an existing citizen science program and tracking site called Flu Near You. As the coronavirus pandemic swept the world, Flu Near You researchers pivoted the tracker to include questions about COVID-19. But they soon realized the platform would perform better if it wasn’t branded for the flu and was instead pushed as a surveillance system for the novel coronavirus.

Sewalk says they already thought the platform could be easily pivoted to deal with a disease outbreak. And they even used it once before to help emergency response efforts after Hurricane Harvey in 2017.

The flu and COVID-19 have many of the same symptoms, so the team didn’t have to start the new website from scratch. That let researchers and their programmers build COVID Near You in about a week. The team of 30 also included volunteer engineers from tech companies like Airbnb, Alphabet and Apple, who offered up their nights and weekends.

“It was great to have a bunch of world-class engineers pitch in and build this,” Sewalk says.

The new site asks users a series of questions, including how they’re feeling, what symptoms they’ve had, when they started and whether they’ve traveled. Then it plots the data point on a map using their ZIP code. There’s also a place for people to say whether they were tested. Of course, Sewalk is quick to point to the major limitation of the dataset: They’re not actually diagnosing COVID-19, so there’s no way to know if it’s a real case. And with allergy season ramping up, there’s plenty of room for confused contributors.

It’s not just the existing platform that they’re leveraging, either. They’re also tapping into longstanding relationships between researchers at Flu Near You and health officials. For years, the program has shared data with the Centers for Disease Control and Prevention, as well as with local officials around the world. They’ve partnered with organizations in Canada, Italy and elsewhere to establish similar Flu Near You projects, some of which have also started collecting coronavirus symptoms.

“We hope this type of data can provide insights of where COVID-19-like symptoms are happening,” she says. “We’re willing to work with anyone from a state and local level. It’s open to anyone who’s interested in the data.”

That sets them apart from some similar services that have appeared in recent weeks. A number of tech companies, including Apple, have recently built their own COVID-19 websites and apps. These services typically run you through symptoms, collect your location and then offer up the CDC’s guidance. COVID Near You is different because of their existing connection to scientists and health officials.

So far, more than 4,000 people have participated. COVID Near You’s own research team is just digging into the data, but they’ll be looking to understand how these self-reported results may differ from the results collected elsewhere, including official counts. If they start noticing clusters of symptoms in surprising places, they can work with local officials on it.