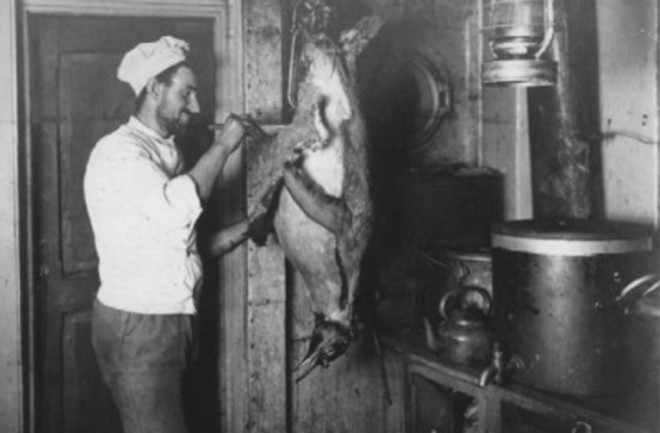 An Emperor penguin being skinned on board the Endurance.

Imagine you’re in Antarctica. It’s cold. You’re cold. Your joints ache, old wounds are reopening to ooze pus, and your teeth loosen, threatening to fall out one or two at a time. What do you feel like eating? How about “a piece of beef, odiferous cod fish and a canvas-backed duck roasted together in a pot, with blood and cod-liver oil for sauce?”

If this sounds delicious, then your stomach serves you well. That’s how famous polar explorer Frederick Cook described the taste of penguin meat, and that is how you cure yourself of scurvy in Antarctica when fresh vegetables are nowhere to be found. Fresh meat—lightly cooked or raw—contains vitamin C, whose deficiency causes scurvy and the delightful symptoms described above.

Unfortunately for turn-of-the-century Antarctic explorers, most expedition leaders were not as enlightened as Cook and many a man succumbed to scurvy. Unfortunately for Antarctica’s penguins, they were also easy prey for the men who did eat them. “Long lines of curious penguins marched across the ice and right into camp, which almost always meant death as dog food, human food, or fuel for the boiler. A stew of penguin heart and liver became a crew favorite,” describes Jason C. Anthony in a paper on Antarctic cuisine in the Heroic Age in Endeavour.

The more hesitant penguins need some musical persuasion, as described by Cook. (h/t Food and Think)

At meal time, a cornet is used to call the men together, and the penguins, it seems, also like the music; for when they hear it they make directly for the ship, and remain as long as the music lasts, but leave once it ceases. In this manner we have only to wait and seize our visitor to obtain penguin steaks, which are, just at present, the prize of the menu.

Penguin meat sure provided a more appetizing (and vitamin C-filled) alternative to “rope-yarn,” as the men so lovingly called the fibrous tinned meat they brought. Eggs were also welcome source of nutrition, though French explorer Jean-Baptiste Charcot supposedly felt some remorse after his men collected over 8,000 eggs from a penguin colony. According to Anthony, “Charcot tried to console the surviving parents with gramophone concerts.” Hopefully, the parents weren’t lured by the music to be turned into steaks too.

Anyone tempted by Cook’s description of penguin as an odiferous mix of beef, cod, and duck may be disappointed to know what eating such a creature, or any creature in the Antarctic, is now strictly prohibited by the Antarctic Treaty System. But modern researchers on the icy continent can look forward to greenhouses and fresh vegetables, so at least they’ll have some way to ward off scurvy.